Fosphenytoin is a water-soluble phenytoin prodrug used only in hospitals for the treatment of epileptic seizures. It works by slowing down impulses in the brain that cause seizures. Its main mechanism is to block frequency-dependent, use-dependent and voltage-dependent neuronal sodium channels, and therefore limit repetitive firing of action potentials. 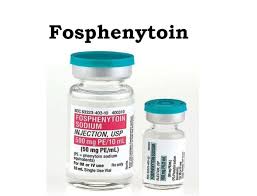 Fosphenytoin is a prodrug of phenytoin and accordingly, its anticonvulsant effects are attributable to phenytoin. Phenytoin acts on sodium channels on the neuronal cell membrane, limiting the spread of seizure activity and reducing seizure propagation. By promoting sodium efflux from neurons, phenytoin tends to stabilize the threshold against hyperexcitability caused by excessive stimulation or environmental changes capable of reducing membrane sodium gradient.

Fosphenytoin is indicated for short-term parenteral administration when other means of phenytoin administration are unavailable, inappropriate or deemed less advantageous. The safety and effectiveness of fosphenytoin in this use has not been systematically evaluated for more than 5 days. Fosphenytoin can be used for the control of generalized convulsive status epilepticus and prevention and treatment of seizures occurring during neurosurgery. It can also be substituted, short-term, for oral phenytoin.

A history of prior acute hepatotoxicity attributable to fosphenytoin or phenytoin

Careful cardiac monitoring is needed during and after administering IV administration; these events have also been reported at or below 150 mg PE/minute

Advise patients not to discontinue use of CEREBYX without consulting with their healthcare provider.

Effects of Alcohol Use and Other Drugs and Over-the-Counter Drug Interactions Caution patients against the use of other drugs or alcoholic beverages without first seeking their physician’s advice.