Zaleplon is a sedative/hypnotic, mainly used for insomnia. It is known as a nonbenzodiazepine hypnotic. Zaleplon interacts with the GABA receptor complex and shares some of the pharmacological properties of the benzodiazepines. 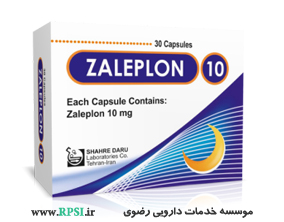 Zaleplon is a nonbenzodiazepine hypnotic from the pyrazolopyrimidine class and is indicated for the short-term treatment of insomnia. While Zaleplon is a hypnotic agent with a chemical structure unrelated to benzodiazepines, barbiturates, or other drugs with known hypnotic properties, it interacts with the gamma-aminobutyric acid-benzodiazepine (GABABZ) receptor complex.

Subunit modulation of the GABABZ receptor chloride channel macromolecular complex is hypothesized to be responsible for some of the pharmacological properties of benzodiazepines, which include sedative, anxiolytic, muscle relaxant, and anticonvulsive effects in animal models. Zaleplon also binds selectively to the CNS GABAA-receptor chloride ionophore complex at benzodiazepine(BZ) omega-1 (BZ1, ο1) receptors

Because sleep disturbances may be the presenting manifestation of a physical and/or psychiatric disorder, symptomatic treatment of insomnia should be initiated only after a careful evaluation of the patient. The failure of insomnia to remit after 7 to 10 days of treatment may indicate the presence of a primary psychiatric and/or medical illness that should be evaluated. Worsening of insomnia or the emergence of new thinking or behavior abnormalities may be the consequence of an unrecognized psychiatric or physical disorder. Such findings have emerged during the course of treatment with sedative/hypnotic drugs, including Zaleplon. Because some of the important adverse effects of Zaleplon appear to be dose-related, it is important to use the lowest possible effective dose, especially in the elderly.

A variety of abnormal thinking and behavior changes have been reported to occur in association with the use of sedative/hypnotics.

Complex behaviors such as “sleep-driving” (i.e., driving while not fully awake after ingestion of a sedative-hypnotic) have been reported. Although behaviors such as sleep-driving may occur with Zaleplon alone at therapeutic doses, the use of alcohol and other CNS depressants with Zaleplon appears to increase the risk of such behaviors. Due to the risk to the patient and the community, discontinuation of Zaleplon should be strongly considered for patients who report a “sleep-driving” episode. Other complex behaviors (e.g., preparing and eating food, making phone calls, or having sex) have been reported in patients who are not fully awake after taking a sedative-hypnotic.

Patients receiving Zaleplon should be cautioned against engaging in hazardous occupations requiring complete mental alertness or motor coordination (e.g., operating machinery or driving a motor vehicle). Zaleplon, as well as other hypnotics, may produce additive CNS-depressant effects when coadministered with other psychotropic medications, anticonvulsants, antihistamines, narcotic analgesics, anesthetics, ethanol, and other drugs that themselves produce CNS depression.

Zaleplon should not be taken with alcohol. Dosage adjustment may be necessary when Zaleplon is administered with other CNS-depressant agents because of the potentially additive effects.

Effects of other CNS depressants being taken concurrently may be potentiated.

Zaleplon should be taken immediately before bedtime or after the patient has gone to bed and has experienced difficulty falling asleep. As with all sedative/hypnotics, taking Zaleplon while still up and about may result in short-term memory impairment, hallucinations, impaired coordination, dizziness, and lightheadedness.