Tropisetron is an indole derivative with antiemetic activity. As a selective serotonin receptor antagonist, tropisetron competitively blocks the action of serotonin at 5HT3 receptors, resulting in suppression of chemotherapy-and radiotherapy-induced nausea and vomiting.

Tropisetron appears to be well tolerated with the most frequently reported adverse effect being headache. Extrapyramidal side effects are rare upon using tropisetron. 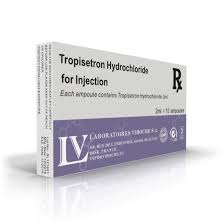 Tropisetron competitively binds to and blocks the action of serotonin at 5HT3 receptors peripherally on vagus nerve terminals located in the gastrointestinal (GI) tract as well as centrally in the chemoreceptor trigger zone (CTZ) of the area postrema of the central nervous system (CNS). This results in the suppression of chemotherapy- and radiotherapy-induced nausea and vomiting.

The absorption of tropisetron from the gastrointestinal tract is rapid (mean half-life of about 20 minutes) and nearly complete (more than 95%). Due to first-pass metabolism in the liver, the absolute bioavailability of a 5 mg oral dose is 60%. The peak plasma concentration is attained within three hours.

71% bound to plasma protein in a non-specific manner.

The metabolism of tropisetron occurs by hydroxylation at the 5, 6 or 7 positions of its indole ring, followed by a conjugation reaction to the glucuronide or sulphate with excretion in the urine or bile (urine to faeces ratio 5:1). The metabolites have a greatly reduced potency for the 5-HT3 receptor and do not contribute to the pharmacological action of the drug.

cap 5mg
amp 5mg/5ml
amp 2mg/2ml
Prevention of Nausea and Vomiting Induced by Cytotoxic Therapy Navoban is recommended as six-day courses of 5 mg per day, given intravenously on Day 1 immediately before cancer chemotherapy either as an infusion given over 15 minutes (see below for dilution instructions) or as a slow injection (not less than 1 minute), followed by oral administration on Days 2 to 6. Capsules should be taken with water in the morning immediately upon rising at least one hour before food intake. If Navoban alone produces insufficient antiemetic control, its therapeutic efficacy may be enhanced by the addition of dexamethasone. For infusion, one ampoule can be diluted in 100 mL of sodium chloride 0.9%; glucose 5%; potassium chloride, sodium chloride and calcium chloride intravenous solution (Ringer's solution); fructose intravenous solution (Levulose 5%); mannitol 10%; potassium chloride 0.3% and sodium chloride 0.9%; potassium chloride 0.3% and glucose 5%. The diluted solutions are physically and chemically stable for at least 24 hours. However, considering the risk of microbial contamination during preparation of the infusion, the solution should be used within eight hours of preparation. Any storage should be at 2-8°C.
Treatment and Prevention of Post-operative Nausea and Vomiting Navoban is recommended as a 2 mg dose given intravenously either as an infusion or as a slow injection (not less than 30 seconds). In the case of prevention of post-operative nausea and vomiting, Navoban should be administered shortly before the induction of anaesthesia

Cross-sensitivity among selective 5-HT antagonists may occur
Serotonin syndrome reported with 5-HT3 receptor antagonists alone but particularly with concomitant use of serotonergic drugs including SSRIs, SNRIs, MAO inhibitors, lithium, tramadol, methylene blue IV, and mirtazapine
May prolong QT interval
Caution should be exercised in patients with cardiac rhythm or conduction disturbances, or in patients treated with anti-arrhythmic or beta-adrenergic blocking agents since, in these patient groups, limited experience is available with concurrent use of Navoban and anaesthetics.

In patients with uncontrolled hypertension, daily doses of Navoban higher than 10 mg should be avoided since they may cause a further increase in blood pressure.
No data exist on the effect of Navoban on the ability to drive or operate machinery. The occurrence of dizziness and fatigue as side effects should be taken into account.