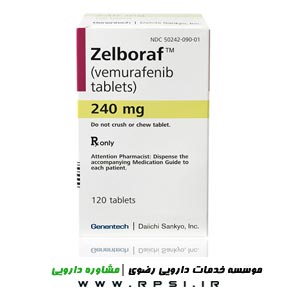 Vemurafenib is an orally available inhibitor of mutated BRAF-serine-threonine kinase. Vemurafenif is a small molecule that interacts as a competitive inhibitor of the mutated species of BRAF. It is especially potent against the BRAF V600E mutation. Vemurafenib blocks downstream processes to inhibit tumour growth and eventually trigger apoptosis. Vemurafenib does not have antitumour effects against melanoma cell lines .with the wild-type BRAF mutation

BRAF activation results in cell growth, proliferation, and metastasis. BRAF is an intermediary molecule in MAPK whose activation depends on ERK activation, elevation of cyclin D1 and cellular proliferation. The mutation V600E produces a constitutively form of BRAF. Vemurafenib has been shown to reduce all activation markers related to BRAF; in clinical trials, vemurafenib treatment showed a reduction of cytoplasmic phosphorylated ERK and a cell proliferation driven by Ki-67. Studies also reported decrease in MAPK-related metabolic activity. All the different reports indicate thet Vemurafenib generates an almost complete inhibition of the MAPK pathway.

absorption: Vemurafenib is well absorbed after oral administration.Peak concentrations are reached in 3 hours when an oral dose of 960 mg twice daily for 15 days has been given to patients. In the same conditions, Vemurafenib presents a Cmax of 62 mcg/ml and AUC of 601 mcg h/ml. It is unknown how food affects the absorption of vemurafenib. It presents an accumulation ratio of 7.36 after repeating doses of 960 mg
volume of distribution: The estimation of the volume of distribution for Vemurafenib is 106 L
protein binding: Vemurafenib highly binds to plasma proteins where >99%
of the administered dose will be found protein bound to serum albumin and alpha-1 acid glycoprotein
metabolism: Vemurafenib is metabolized by CYP3A4 and the metabolites make up 5% of the components in plasma. The parent compound makes up for the remaining 95%.
route of elimination: Analysis showed that 94% of administered Vemurafenib is excreted via feces and 1% is excreted by urine.
half-life: The elimination half-life of Vemurafenib is estimated to be 57 hours (range of 30-120 hours).

Anaphylaxis and other serious hypersensitivity reactions reported during treatment and upon reinitiation, including generalized rash and erythema, hypotension, and drug reaction with eosinophilia and systemic symptoms (DRESS syndrome); permanently discontinue

Elevated liver enzymes may occur; monitor liver enzymes and bilirubin before treatment initiation and then monthly or as clinically indicated

Liver injury leading to functional hepatic impairment, including coagulopathy or other organ dysfunction, can occur with vemurafenib

Based on mechanism of action, can cause fetal harm when administered to pregnant women; avoid use during pregnancy and use effective contraception (see Pregnancy

BRAF mutation test required to confirm eligibility for treatment; has not been studied with wild-type BRAF melanoma

There are no available data on the use of vemurafenib in pregnant women to determine the drug-associated risk
Based on mechanism of action, therapy can cause fetal harm when administered to pregnant women; advise females of reproductive potential to use effective contraception during treatment and for 2 weeks after the final dose

There is no information available regarding presence of vemurafenib in human milk, effects on breastfed infant, or effects on milk production; because of potential for serious adverse reactions in breastfed infant, including malignancy, severe dermatologic reactions, QT prolongation, hepatotoxicity, photosensitivity, and ophthalmologic toxicity, advise women not to breastfeed during treatment and for 2 weeks after final dose