Roxithromycin prevents bacterial growth by interfering with their protein synthesis. It binds to the 50S subunit of bacterial ribosomes and inhibits the translocation of peptides. 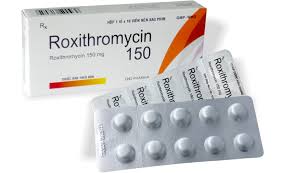 Roxithromycin prevents bacterial growth by interfering with their protein synthesis. It binds to the 50S subunit of bacterial ribosomes and inhibits the translocation of peptides

Roxithromycin is highly concentrated in polymorphonuclear leukocytes and macrophages, achieving intracellular concentrations greater than those outside the cell. Roxithromycin enhances the adhesive and chemotactic functions of these cells which in the presence of infection produce phagocytosis and bacterial lysis. Roxithromycin also possesses intracellular bactericidal activity.

Very rapidly absorbed and diffused into most tissues and phagocytes

You may take this according to one of the following dosage regimens:

Prolongation of the QT Interval

Ventricular arrhythmias associated with prolonged QT interval, including ventricular tachycardia and torsades de pointes have been reported with macrolide antibiotics including roxithromycin. Prescribers should consider the risk of QT prolongation (which can be fatal) when weighing the risks and benefits of roxithromycin for at-risk groups including: • Patients predisposed to QT interval prolongation such as those with a history of torsades de pointes or congenital long QT syndrome. • Patients taking other medication known to prolong the QT interval such as antiarrhythmics of classes IA and III; antipsychotic agents; antidepressants; and fluoroquinolones. • Patients with electrolyte disturbance, particularly in cases of hypokalaemia and hypomagnesaemia. • Patients with clinically relevant bradycardia, cardiac arrhythmia or cardiac insufficiency

Tell your doctor if you have or have had any of the following medical conditions:

Tell your doctor if you are pregnant or plan to become pregnant. This medicine is not recommended for use during pregnancy.

Tell your doctor if you are breastfeeding or planning to breastfeed.

Tell your doctor or pharmacist if you plan to have surgery.

Pregnancy: B1(Drugs which have been taken by only a limited number of pregnant women and women of childbearing age, without an increase in the frequency of malformation or other direct or indirect harmful effects on the human fetus having been observed. Studies in animals have not shown evidence of an increased occurrence of fetal damage)