Tibolone is a synthetic steroid hormone drug, which is mainly non-selective in its binding profile, acting as an agonist primarily at estrogen receptors (ER), with a preference for ER alpha
For the relief of post-menopausal symptoms and for the prevention of osteoporosis 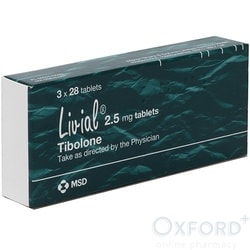 This drug's effects are owed to the activity of its metabolites in various tissues.

Upon ingestion, tibolone is quickly converted into three major metabolites: 3 alpha- and 3 beta-hydroxy-tibolone, which have oestrogenic effects, and the Delta(4)-isomer, which has progestogenic and androgenic effects. The specific tissue-selective effects of tibolone occur due to the metabolism, regulation of enzymes and receptor activation that varies in different tissues of the body.

The bone-conserving effects occur due to estradiol receptor activation, while the progesterone and androgen receptors are not involved in this process. Breast tissue of monkeys is not found to be stimulated after tibolone administration, as occurs with estrogen plus progesterone used in combination. This is explained by the fact that tibolone and its metabolites inhibit sulphatase and 17 beta-hydroxysteroid dehydrogenase (HSD) type I and stimulate sulphotransferase and 17 beta-HSD type II. The combined effects of this process prevent the conversion to active estrogens.

In the uterus, the progestogenic activity of the Delta(4)-metabolite and the effect on estrogen-inactivating enzymes prevent estrogenic stimulation. The mammary gland is not stimulated in currently used animal models. Tibolone has been shown to regulate estrogenic activity in several tissue types by influencing the availability of estrogenic compounds for the estradiol receptor in a selective manner .

Additionally, tibolone modulates cellular homeostasis in the breast by preventing breast tissue proliferation and stimulating cell apoptosis. Tibolone does not stimulate the endometrium because of the action of its highly stable progestogenic metabolite (Delta(4)-isomer) in combination with an effect on the sulfatase (inhibition)-sulfotransferase (stimulation) system. The estrogenic metabolites of tibolone have direct, favorable effects on the cardiovascular system and, in animal models, this drug has shown no adverse consequences.

In a study of monkeys, breast tissue was not stimulated, which occurs with estrogen and progesterone, because tibolone and its metabolites inhibit sulfatase and 17 beta-hydroxysteroid _dehydrogenase (HSD) type I and stimulate _sulfotransferase and 17 beta-HSD type II. The simultaneous effects of this process halt conversion to active estrogens. Additionally, tibolone affects cellular homeostasis in the breast by preventing proliferation and stimulating apoptosis. Tibolone does not stimulate the endometrium due to the action of the highly stable progestogenic metabolite (Delta(4)-isomer) in combination with an effect on the sulphatase (inhibition)-sulphotransferase (stimulation) pathway.

The levels of tibolone metabolites and the alteration of hormonal activities vary according to the tissue type. In endometrial tissue the Δ4-isomer functions as a progestagen, however, in the brain and liver, it shows androgenic effects. In breast tissue, the primary actions of tibolone are strong inhibition of sulfatase activity and weak inhibition of 17β-hydroxysteroid dehydrogenase activity, which leads to blocking the conversion estrone sulfate to E2

Tibolone prevents bone loss and treating post-menopausal symptoms without stimulating the endometrial tissues, which may lead to malignancy. Typical, drugs that treat post-menopausal symptoms such as estrogen, have a proliferative effect on the endometrium, increasing the risk of endometrial carcinoma . The effects on the bone, brain and vaginal tissues can be explained by the estrogenic activity of tibolone. It is important to note that activity is not expressed in the endometrium. Tibolone behaves differently from estrogen plus progesterone combinations on the breast. Therefore, tibolone can be characterized as a selective estrogen activity regulator .

Tibolone has been demonstrated to be an effective agent in treating symptoms associated with menopause. A 16 week trial in 1189 women examined the effect of tibolone 2.5 mg once daily on climacteric symptoms. Women treated with tibolone showed improvement from baseline in typical menopausal symptoms including hot flashes, sweating, insomnia, and anxiety

Tibolone is metabolized mainly in the liver .

The cytochrome P450 isoenzyme system is involved in minor hydroxylation of tibolone .

Tibolone is rapidly converted into three major metabolites: 3 alpha- and 3 beta-hydroxy-tibolone, which have oestrogenic effects, and the Delta(4)-isomer, which has both progestogenic and androgenic effects. The 3-hydroxy metabolites are present in the circulation, predominantly in their inactive sulfated form.

Excreted in the urine and feces in the form of sulfated metabolites .

The predominant route of elimination of tibolone is via the feces, although some excretion occurs via the urine .

The elimination half-life is approximately 45 h .

Elimination of tibolone is not dependent renal function

Take one tablet every day

For the treatment of postmenopausal symptoms, Livial should only be initiated for symptoms that adversely affect quality of life. In all cases, a careful appraisal of the risks and benefits should be undertaken at least annually and Livial should only be continued as long as the benefit outweighs the risk.

The risks of stroke, breast cancer and, in women with an intact uterus, endometrial cancer (see below and section 4.8) for each woman should be carefully assessed, in the light of her individual risk factors and bearing in mind the frequency and characteristics of both cancers and stroke, in terms of their response to treatment, morbidity and mortality.

Evidence regarding the risks associated with HRT or tibolone in the treatment of premature menopause is limited. Due to the low level of absolute risk in younger women, however, the balance of benefits and risks for these women may be more favourable than in older women.

Store in a cool, dry place, away from direct heat and light

Tibolone is contraindicated during pregnancy . If pregnancy occurs during medication with Tibolone, treatment should be withdrawn immediately. For Tibolone no clinical data on exposed pregnancies are available. Studies in animals have shown reproductive toxicity . The potential risk for humans is unknown.

Tibolone is contraindicated during lactation