Abiraterone is a derivative of steroidal progesterone and is an innovative drug that offers clinical benefit to patients with hormone refractory prostate cancer. Abiraterone is administered as an acetate salt prodrug because it has a higher bioavailability and less susceptible to hydrolysis than abiraterone itself. 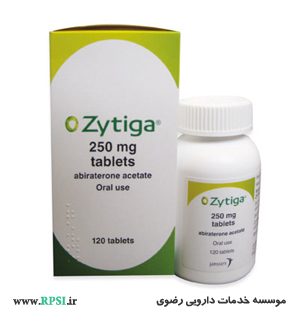 Abiraterone is an orally active inhibitor of the steroidal enzyme CYP17A1 (17 alpha-hydroxylase/C17,20 lyase). It inhibits CYP17A1 in a selective and irreversible manner via covalent binding mechanism. CYP17A1 is an enzyme that catalyzes the biosynthesis of androgen and is highly expressed in testicular, adrenal, and prostatic tumor tissue.

More specifically, abiraterone inhibits the conversion of 17-hydroxyprognenolone to dehydroepiandrosterone (DHEA) by the enzyme CYP17A1 to decrease serum levels of testosterone and other androgens.

Abiraterone is associated with decreases in PSA levels, tumor shrinkage (as evaluated by RECIST criteria), radiographic regression of bone metastases and improvement in pain. Levels of adrenocorticotropic hormones increased up to 6-fold but this can be suppressed by dexamethasone.

Absorption: Abiraterone itself is poorly absorbed and is susceptible to hydrolysis by esterases. The salt form, abiraterone acetate, is a prodrug which has a much higher oral bioavailability and is also esterase resistant. Peak drug concentrations of abiraterone were reached in 1.5 - 4 hours. Abiraterone acetate was rapidly and completely deacetylated into abiraterone-the parent salt form was not detectable in early pharmacokinetic studies. Food and high fat meals increases absorption 4.4-fold.

1,000 mg orally once a day on an empty stomach (in combination with prednisone 5 mg orally 2 times a day)

You should not use abiraterone if you are allergic to it, or if you have ever had:

To make sure abiraterone is safe for you, tell your doctor if you have:

While you are taking abiraterone and for at least 1 week after your treatment ends:

Although abiraterone is not for use by women, this medicine can harm an unborn baby or cause birth defects. Abiraterone tablets should not be handled by a woman who is pregnant or who may become pregnant. If this cannot be avoided, the woman should wear latex gloves.

It is not known whether abiraterone passes into breast milk or if it could harm a nursing baby. Abiraterone should not be used by a woman who is breast-feeding a baby.

Abiraterone is not approved for use by anyone younger than 18 years old.

Abiraterone is usually taken once per day while also taking prednisone two times per day. Follow all directions on your prescription label. Do not take this medicine in larger or smaller amounts or for longer than recommended.

Your prednisone dosage needs may change if you have surgery, are ill, or are under stress. Do not change your medication dose or schedule without your doctor's advice.

Do not crush, chew, or break an abiraterone tablet. Swallow it whole with a full glass of water.

Your blood pressure will need to be checked often, and you may need frequent blood tests at your doctor's office.

You should not stop using abiraterone or prednisone suddenly. Follow your doctor's instructions about tapering your prednisone dose.

Skip the missed dose and take the medicine the following day on an empty stomach (no food for at least 1 hours before or 2 hour after you take abiraterone). Do not take extra medicine to make up the missed dose.

Call your doctor for instructions if you miss more than one dose of abiraterone.