Acemetacin is a carboxymethyl ester of indometacin . It is a potent non-steroidal anti-inflammatory drug, derived from the indol-3-acetic acid, whose activity is thought to be mainly through its active metabolite indomethacin. 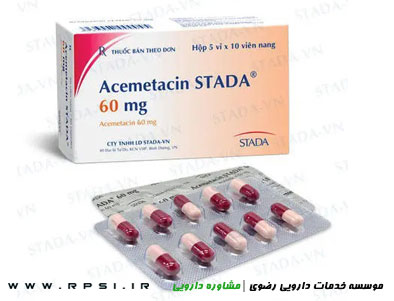 Acemetacin is a non-selective inhibitor of the production of pro-inflammatory mediators derived from the action of the enzyme COX. COX is essential for the synthesis of prostaglandin E2 and F2 which are molecules derived from fatty acids and stored in the cell membrane.

Acemetacine is metabolized and forms its major metabolite indometacin which is also a non-selective inhibitor of COX and exhibits the capacity to inhibit the motility of polymorphonuclear leukocytes and decreased cerebral flow by modulating the nitric oxide pathway and vasoconstriction.

Studies have shown that acemetacin strongly inhibits the release of histamine from mast cells and the generation of hyperthermia. Acemetacin effect also causes changes in systolic and diastolic blood pressure as well as inhibition of platelet aggregation.

Absorption: After 8 days of oral administration twice daily of acemetacin there was an age-dependant Cmax of 276.8 ng/ml in elderly compared to 187 ng/ml for younger individuals. There was also a Tmax of 2.5 h and AUC in a range of 483-712 ng h/ml. The bioavailability of acemetacin after repeated doses is aproximately 66% in plasma and 64% in urine.

Metabolism:Acemetacin is highly metabolized and degraded by esterolytic cleavage to form its major and active metabolite indometacin. It presents other inactive metabolites made by reaction of O-demethylation, N-desacylation and part of them are also transformed by conjugation with glucuronic acid.

The recommended daily dose range is 60 –180 mg Acemetacin, divided into 1 to 3 single doses.

on safety and efficacy in this patient group.

Gastrointestinal bleeding, ulceration or perforation, which can be fatal, have been reported

with all NSAIDs, and may occur at any time during treatment, with or without warning

symptoms or a previous history of serious gastrointestinal events. The risk is higher with

increasing NSAID doses, in patients with a history of ulcer, particularly if complicated with

haemorrhage or perforation, in patients with a history of gastrointestinal disease (e.g.

If you experience gastrointestinal bleeding or ulceration during the treatment with acemetacin, the treatment should be withdrawn.

Serious skin reactions (e.g. exfoliative dermatitis, Stevens-Johnson-Syndrome and toxic epidermal necrolysis) are very rare during the use of NSAIDs. You must discontinue the use

of acemetacin at the first appearance of any sign of severe hypersensitivity, skin rash,

mucosal lesions or any other sign of allergic reaction.

Headache may occur as a result of long-term treatment with analgesics. You should not treat

this headache with higher doses of analgesics.

In general, habitual use of analgesics, especially the combination of different analgesic

substances, may lead to irreversible kidney impairment with the risk of kidney insufficiency

Always take this medicine exactly as your doctor has told you.

acemetacin is dosed according to the severity of the disease Please swallow acemetacin unchewed and with a sufficient amount of liquid. You should not take acemetacin on an empty stomach.

If you have a sensitive stomach you should take acemetacin during a meal.