Danaparoid is a low-molecular-weight heparinoid with an average molecular weight of 5500 Daltons consisting of a mixture of glycosaminoglycans. The active constituents are heparan, dermatan and Chondroitin sulfate, and they are isolated from the porcine intestinal mucosa. 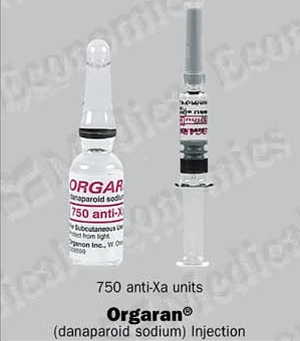 In the coagulation cascade leading to clot formation, factor X and factor II requires activation to promote subsequent conversion of fibrinogen to fibrin. The mechanism of action of danaparoid resulting in anticoagulant and antithrombic effects involves a complex interaction between 2 components, factor IIa and in particular, factor Xa. Via binding to antithrombin and inducing a conformational change [A32579], danaparoid enhances and catalyzes the the binding of factor Xa to antithrombin, which induces antithrombin-mediated inactivation of factor Xa. This leads to inhibition of thrombin generation and subsequently, thrombus formation.

Danaparoid is as an antithrombotic agent that prevents the formation of fibrin in the coagulation pathway. Danaparoid has a minor effect on platelet function and aggregation. In healthy volunteers, danaparoid caused significantly less prolongation of the activated partial thromboplastin time (APTT) and was associated with a significantly lower thrombin time than unfractionated heparin (UFH) and low molecular weight heparins (LMWHs). Danaparoid displays lower lipolytic activity than UFH in vitro and in healthy individuals, leading to lower plasma levels of free fatty acids.

Metabolism: There is no evidence of hepatic metabolism and danaparoid is unlikely to undergo cellular metabolism.

750 anti-factor Xa units, twice  daily for 7 to 10 days or until the  risk of thromboembolism has  diminished.

There is insufficient experience  with the use of Danaparoid  Sodium in children to suggest  a dosage regimen for this group  of patients.

Although the risk of antibody-induced thrombocytopenia and thrombosis during DanaparoidSodium therapy (i.e. clinical cross-reactivity) is very small, it is advisable to check the number of platelets daily during the first week of treatment, on alternate days during the second and third weeks, and weekly to monthly thereafter. Ifantibody-induced thrombocytopenia occurs, one should stop the use of Danaparoid Sodium and consider alternative treatment.

Danaparoid Sodium should be used with caution in patients with moderately impaired renal, and/or liver function with impaired haemostasis, ulcerative lesions of the gastro-intestinal tract or other diseases which may lead to an increased danger of haemorrhage into avital organ or site.

Since severe bleeding may occur post-operatively in HIT patients undergoing acardiopulmonary bypass procedure, DanaparoidSodium is not recommended during the procedure, unless no other antithrombotic treatment is available.

Danaparoid Sodium should not be given by the intramuscular route.

The safety and efficacy of Danaparoid Sodium in patients with non-haemorrhagic stroke remains to be confirmed.

Aswith heparins, in patients undergoing peridural or spinal anaesthesia or spinal puncture, the prophylactic use of Danaparoid Sodium may theoretically be associated with epidural or spinal haematomaresulting in prolonged or permanent paralysis. The risk is increased by the prolonged use of aperidural or spinal catheter for analgesia, by the concomitant use of drugs affecting haemostasis such as nonsteroidal anti-inflammatory drugs (NSAIDs), and by traumatic or repeated puncture.•

Indecision-making on the interval between the last administration of DanaparoidSodium at prophylactic doses and the placement or removal of aperidural or spinal catheter, the product characteristics and the patient profile should be taken into account. Subsequent dose should not take place before at least four hours have elapsed. Re-administration should be delayed until the surgical procedure is completed.

Should aphysician decide to administer Danaparoid Sodium in the context of peridural or spinal anaesthesia, extreme vigilance and frequent monitoring must be exercised to detectany signs and symptoms of neurologic impairment, such as back pain, sensory and motor deficits (numbness and weakness in lower limbs) and bowel or bladder dysfunction. Nurses should be trained to detect such signs and symptoms. Patients should be instructed to inform immediately anurse or aclinician if they experience any of these.

Ifsigns or symptoms of epidural or spinal haematoma are suspected, urgent diagnosis and treatment including spinal cord decompression should be initiated.