A muscarinic antagonist used to treat drug-induced parkinsonism and to relieve pain from muscle spasm. 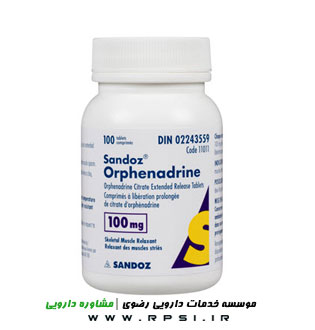 Orphenadrine binds and inhibits both histamine H1 receptors and NMDA receptors. It restores the motor disturbances induced by neuroleptics, in particular the hyperkinesia. The dopamine deficiency in the striatum increases the stimulating effects of the cholinergic system. This stimulation is counteracted by the anticholinergic effect of orphenadrine. It may have a relaxing effect on skeletal muscle spasms and it has a mood elevating effect.

Orphenadrine is indicated as an adjunct to rest, physical therapy, and other measures for the relief of discomfort associated with acute painful musculoskeletal conditions. Orphenadrine is an anticholinergic with a predominantly central effect and only a weak peripheral effect. In addition, it has mild antihistaminic and local anaesthetic properties.

Parkinson's syndrome is the consequence of a disturbed balance between cholinergic and dopaminergic neurotransmission in the basal ganglia caused by a decrease in dopamine. Orphenadrine restores the physiological equilibrium and has a favourable effect on the rigidity and tremor of Parkinson's disease and Parkinsonian syndromes. The effect is somewhat less on bradykinesia.

May take with food to avoid stomach upset

Follow all directions on your prescription label. Do not take orphenadrine in larger or smaller amounts or for longer than recommended.

Orphenadrine may be habit-forming. Never share orphenadrine with another person, especially someone with a history of drug abuse or addiction. Keep the medication in a place where others cannot get to it.

Orphenadrine is usually taken 2 times per day, once in the morning and once in the evening. Follow your doctor's dosing instructions.

Do not crush, chew, or break an extended-release tablet. Swallow it whole.

Orphenadrine is only part of a complete program of treatment that may also include rest, physical therapy, or other pain relief measures.

Store orphenadrine at room temperature away from moisture, heat, and light. Keep the bottle tightly closed when not in use.