Ergoloid Mesylate is an equiproportional preparation of three different ergotamantriones: dihydroergocornine, dihydroergocristine, and dihydroergocryptine. All these components are produced by the fungus Claviceps purpurea and are all derivatives of the tetracyclic compound 6-methylergonovine.

It is used to relieve the signs and symptoms of decreased mental capacity due to the aging process. 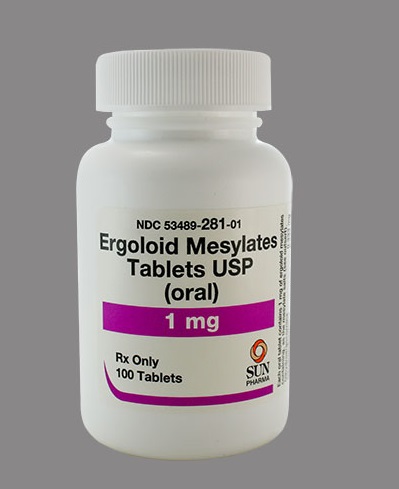 The general mechanism of action of ergoloid mesylate is the dual action of partial agonism/antagonism of adrenergic, dopaminergic and serotonergic receptors. The pharmacological activity is determined by the degree of activity of each component at the receptor site.

It is thought that it increases both the blood flow and cerebral metabolism. Some studies have shown a significant improvement in alertness and memory, as well as a decline in confusion while some other benefits have shown a lack of effect.

The ergoloid mesylate mixture is mainly excreted via bile in feces. The ratio of the eliminated dose via urine after intravenous and oral administration is 8.4% and 2% respectively.

The reported plasma half-life of ergoloid mesylate is 3.5 hours while the terminal half-life is of 13 hours.

For the treatment of symptoms of an idiopathic decline in the mental capacity not related to a potentially reversible condition.

Before taking ergoloid mesylates, tell your doctor or pharmacist if you are allergic to them; or to other ergot alkaloids (e.g., dihydroergotamine, ergotamine); or if you have any other allergies.

This medication should not be used if you have certain medical conditions. Before using this medicine, consult your doctor or pharmacist if you have: a certain mental/mood disorder (psychosis).

Ergoloid mesylates are extensively metabolized by the liver. Therefore, ergoloid mesylates should be used with caution in patients with hepatic disease, since hepatic impairment could limit drug elimination mechanisms.

Although specific data are lacking for ergoloid mesylates, natural ergot alkaloids are considered contraindicated (pregnancy risk category X) during pregnancy due to their oxytocic and uterine stimulant properties.