Phendimetrazine is a sympathomimetic amine, which is similar to an amphetamine.

Phendimetrazine stimulates the central nervous system (nerves and brain), which increases your heart rate and blood pressure and decreases your appetite.

Phendimetrazine is a prescription medicine that is used together with diet and exercise to treat obesity. 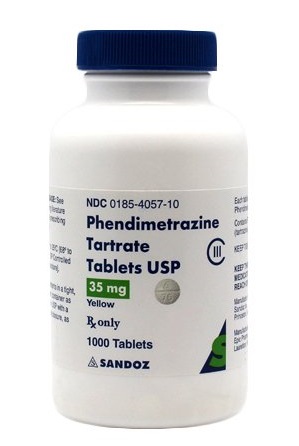 Phendimetrazine may act in a similar way to amphetamines in that it activates the alpha-adrenergic system to induce an appetite suppressive and metabolic increase effect. The drug also acts as a norepinephrine-dopamine releasing agent (NDRA). It can bind to and reverse the NET.

Phendimetrazine is a phenylalkylamine sympathomimetic amine with pharmacological activity similar to the prototype drugs of this class used in obesity, the amphetamines. Actions include central nervous system stimulation and elevation of blood pressure. Tachyphylaxis and tolerance has been demonstrated with all drugs of this class in which these phenomena have been looked for. Drugs of this class used in obesity are commonly known as ''anorectics or anorexigenics." It has not been established, however, that the action of such drugs in treating obesity is primarily one of appetite suppression. Other central nervous system actions or metabolic effects, may be involved.

Peak plasma levels occur within 1 to 3 hours. Absorption is usually complete by 4 to 6 hours.
Approximately 30% of a given dose of phendimetrazine is metabolized into phenmetrazine, which may account for part of its anorectic effect, and probably also influences abuse potential; individuals who metabolise a greater proportion of phendimetrazine into phenmetrazine are more likely to develop problems with dependence and addiction
The major route of elimination is via the kidneys where most of the drug and metabolites are excreted.

Used in the management of exogenous obesity as a short term adjunct (a few weeks) in a regimen of weight reduction based on caloric restriction.

Extended-release: 105 mg orally once a day, 30 to 60 minutes before morning meal

You should not use phendimetrazine if you have glaucoma, overactive thyroid, severe heart problems, uncontrolled high blood pressure, advanced coronary artery disease, extreme agitation, or a history of drug abuse.

Do not use this medicine if you have used an MAO inhibitor in the past 14 days, such as isocarboxazid, linezolid, methylene blue injection, phenelzine, rasagiline, selegiline, or tranylcypromine. A dangerous drug interaction could occur, leading to serious side effects
You should not use phendimetrazine if you are allergic to it

Serious side effects of phendimetrazine include:

Severe interactions of phendimetrazine include:

Keep out of reach of children. In case of overdose, get medical help or contact a Poison Control Center immediately

Phendimetrazine use while breastfeeding is contraindicated; do not nurse if taking this drug.