Diflunisal is a nonsteroidal anti-inflammatory drug (NSAID). It works by reducing hormones that cause inflammation and pain in the body.

Diflunisal is used to treat mild to moderate pain, osteoarthritis, or rheumatoid arthritis. 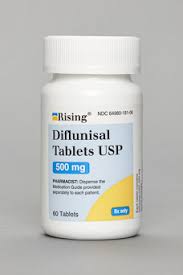 Reversibly inhibits cyclooxygenase-1 and 2 (COX-1 and 2) enzymes, which results in decreased formation of prostaglandin precursors; has antipyretic, analgesic, and anti-inflammatory properties.

Time to reach the peak

8 to 12 hours; prolonged with renal impairment

Comments: A lower dose may be appropriate depending on such factors as pain severity, patient response, weight, or advanced age; for example, 500 mg initially, followed by 250 mg every 8 to 12 hours.

Comments: A lower dose may be appropriate depending on such factors as pain severity, patient response, weight, or advanced age; for example, 500 mg initially, followed by 250 mg every 8 to 12 hours.

1-Known hypersensitivity to diflunisal or any component of the formulation

2-in the setting of coronary artery bypass graft (CABG) surgery

3-history of asthma, urticaria, or allergic-type reactions after taking aspirin or other NSAIDs

1-You should not use diflunisal if you are allergic to it, or if you have ever had an asthma attack or severe allergic reaction after taking aspirin or an NSAID.

2-Taking diflunisal during the last 3 months of pregnancy may harm the unborn baby. Tell your doctor if you are pregnant or plan to become pregnant while using diflunisal.

3-Diflunisal is not approved for use by anyone younger than 12 years old. Ask a doctor before giving this medicine to a child or teenager with a fever, flu symptoms, or chicken pox.

5-NSAIDs may cause an increased risk of serious cardiovascular thrombotic events, myocardial infarction, and stroke, which can be fatal. This risk may be increased in patients with cardiovascular disease or risk factors for cardiovascular disease. Diflunisal is contraindicated for the treatment of perioperative pain in the setting of CABG surgery. NSAIDs can also cause an increased risk of serious gastrointestinal adverse events especially in the elderly, including bleeding, ulceration, and perforation of the stomach or intestines, which can be fatal.

6-May cause drowsiness, dizziness, blurred vision, and other neurologic effects which may impair physical or mental abilities; patients must be cautioned about performing tasks which require mental alertness (eg, operating machinery or driving).

7-Platelet adhesion and aggregation may be decreased; may prolong bleeding time; patients with coagulation disorders or who are receiving anticoagulants should be monitored closely. Anemia may occur; patients on long-term NSAID therapy should be monitored for anemia. Rarely, NSAID use has been associated with potentially severe blood dyscrasias (eg, agranulocytosis, thrombocytopenia, aplastic anemia).

9-NSAID use may increase the risk of hyperkalemia, particularly in the elderly, diabetics, renal disease, and with concomitant use of other agents capable of inducing hyperkalemia (eg, ACE-inhibitors). Monitor potassium closely.

10-A potentially life-threatening, hypersensitivity syndrome has been reported; monitor for constitutional symptoms and cutaneous findings; other organ dysfunction may be involved.

11-Blurred vision has been reported; refer for ophthalmologic evaluation if symptoms occur.

13-Diflunisal is a derivative of acetylsalicylic acid and therefore may be associated with Reye’s syndrome.

14- NSAIDs may cause potentially fatal, serious skin adverse events including exfoliative dermatitis, Stevens-Johnson syndrome (SJS), and toxic epidermal necrolysis (TEN); may occur without warning; discontinue use at first sign of skin rash (or any other hypersensitivity).

1-Diflunisal can increase your risk of fatal heart attack or stroke, especially if you use it long term or take high doses, or if you have heart disease. Do not use diflunisal just before or after heart bypass surgery (coronary artery bypass graft, or CABG).

2-Diflunisal may also cause stomach or intestinal bleeding, which can be fatal. These conditions can occur without warning while you are using diflunisal, especially in older adults.

3-To make sure diflunisal is safe for you, tell your doctor if you have:

-a history of heart attack, stroke, or blood clot

-a history of stomach ulcers or bleeding

4-Do not crush, break, or chew a diflunisal tablet. Swallow it whole.

5-Avoid drinking alcohol. It may increase your risk of stomach bleeding.

6-Avoid taking aspirin or other NSAIDs while you are taking diflunisal.

7-Ask your doctor before using an antacid, and use only the type your doctor recommends. Some antacids can make it harder for your body to absorb diflunisal.

avoid in late pregnancy; may cause premature closure of ductus arteriosus.