Nabumetone is a nonsteroidal anti-inflammatory drug (NSAID). Nabumetone works by reducing hormones that cause inflammation and pain in the body.
Nabumetone is used to relieve the symptoms of rheumatoid arthritis or osteoarthritis. 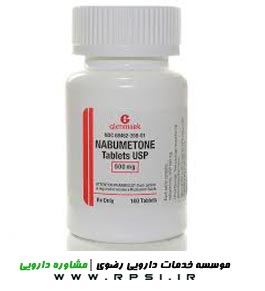 PGE2 is the primary PG involved in modulation of nociception. It mediates peripheral sensitization through a variety of effects. PGE2 activates the Gq-coupled EP1 receptor leading to increased activity of the inositol trisphosphate/phospholipase C pathway. Activation of this pathway releases intracellular stores of calcium which directly reduces action potential threshold and activates protein kinase C (PKC) which contributes to several indirect mechanisms. PGE2 also activates the EP4 receptor, coupled to Gs, which activates the adenylyl cyclase/protein kinase A (AC/PKA) signaling pathway. PKA and PKC both contribute to the potentiation of transient receptor potential cation channel subfamily V member 1 (TRPV1) potentiation, which increases sensitivity to heat stimuli. They also activate tetrodotoxin-resistant sodium channels and inhibit inward potassium currents. PKA further contributes to the activation of the P2X3 purine receptor and sensitization of T-type calcium channels. The activation and sensitization of depolarizing ion channels and inhibition of inward potassium currents serve to reduce the intensity of stimulus necessary to generate action potentials in nociceptive sensory afferents. PGE2 act via EP3 to increase sensitivity to bradykinin and via EP2 to further increase heat sensitivity. Central sensitization occurs in the dorsal horn of the spinal cord and is mediated by the EP2 receptor which couples to Gs. Pre-synaptically, this receptor increases the release of pro-nociceptive neurotransmitters glutamate, CGRP, and substance P. Post-synaptically it increases the activity of AMPA and NMDA receptors and produces inhibition of inhibitory glycinergic neurons. Together these lead to a reduced threshold of activating, allowing low intensity stimuli to generate pain signals. PGI2 is known to play a role via its Gs-coupled IP receptor although the magnitude of its contribution varies. It has been proposed to be of greater importance in painful inflammatory conditions such as arthritis. By limiting sensitization, both peripheral and central, via these pathways NSAIDs can effectively reduce inflammatory pain.
PGI2 and PGE2 contribute to acute inflammation via their IP and EP2 receptors. Similarly to β adrenergic receptors these are Gs-coupled and mediate vasodilation through the AC/PKA pathway. PGE2 also contributes by increasing leukocyte adhesion to the endothelium and attracts the cells to the site of injury. PGD2 plays a role in the activation of endothelial cell release of cytokines through its DP1 receptor. PGI2 and PGE2 modulate T-helper cell activation and differentiation through IP, EP2, and EP4 receptors which is believed to be an important activity in the pathology of arthritic conditions. By limiting the production of these PGs at the site of injury, NSAIDs can reduce inflammation.


PGE2 can cross the blood-brain barrier and act on excitatory Gq EP3 receptors on thermoregulatory neurons in the hypothalamus. This activation triggers an increase in heat-generation and a reduction in heat-loss to produce a fever. NSAIDs prevent the generation of PGE2 thereby reducing the activity of these neurons.

The adverse effects of NSAIDs stem from the protective and regulatory roles of prostanoids which have been well-characterized. PGI2 and PGE2 regulate blood flow to the kidney by similar mechanisms to the vasodilation they produce in inflammation. Prevention of this regulation by NSAIDs produces vasoconstriction which limits renal function by reducing blood flow and the hydrostatic pressure which drives filtration. PGE2 also regulates gastric protection via EP3 receptors which are, in this location, coupled to Gi which inhibits the AC/PKA pathway. This reduces the secretion of protons by H+/K+ ATPase in parietal cells and increases the secretion of mucus and HCO3- by superficial endothelial cells. Disruption of this protective action by NSAIDs lead to ulceration of the gastric mucosa. Lastly, disruption of PGI2, which opposes platelet aggregation, generation by COX-2 selective agents leads to an imbalance with TXA2 generated by COX-1, which promotes aggregation of platelets, leading to increased risk of thrombosis. Since nabumetone is somewhat COX-2 selective it is thought to promote this imbalance and increase thrombotic risk.

NSAIDs, like nabumetone, are well established as analgesics. NSAIDs reduce both peripheral and central sensitization of nociceptive neurons due to inflammation which contribute to hyperalgesia and allodynia. This sensitization occurs through reducing the action potential threshold in peripheral neurons, reducing the intensity of painful stimuli needed to produce a painful sensation. Centrally, activation of dorsal horn neurons occurs along with increased release of glutamate, calcitonin gene-related peptide (CGRP), and substance P which increase the transmission of painful stimuli. Coupled with this is an inhibition glycinergic neurons which normally inhibit pain transmission, a phenomenon known as disinhibition. Increased activity ofn-methyl d-aspartate (NMDA) and α-amino-3-hydroxy-5-methyl-4-isoxazolepropionic acid (AMPA) receptors leads to the establishment of central sensitization, allowing both mild painful and innocuous stimuli to produce action potentials in nociceptive projection neurons. NSAIDs are effective in reducing mild-moderate acute and chronic nociceptive pain, however, the usefulness of NSAIDs in neuropathic pain is limited.
The anti-inflammatory effect of NSAIDs is mediated by preventing vasodilation, increases in vascular permeability, and the release of cytokines from endothelial cells. These three effects together prevent immunocompetent cells from migrating to the site of injury thereby preventing additional damage and inflammation due to activation of the immune system at the site of damage. PGs also modulate T-helper cell activation and differentiation, an activity which is thought to be of importance in arthritic conditions.
The anti-pyretic effect of NSAIDs is mediated through preventing increases in temperature by prostaglandins (PGs) via the hypothalamus. Activation of this process by other inflammatory mediators relies upon subsequent action by PGs, therefore NSAIDs are able to reduce fever due to these mediators as well.
The adverse effects of NSAIDs are related to their therapeutic effects. The same vasodilatory action which occurs in inflammation also serves to regulate blood flow to the kidneys through the afferent renal arteries. NSAIDs are widely known as nephrotoxic agents as the reduction in PGs produces vasoconstriction of these arteries resulting in reduced blood flow to the kidneys and a subsequent decline in renal function. Reductions in mucus and HCO3- secretion in the stomach increases the risk of ulceration by limiting the protection mediated by PGs. Lastly, COX-2 selective agents like nabumetone can unbalance prothrombotic and antithrombotic prostanoid generation leading to increased platelet aggregation and increased risk of thrombosis.

absorption:
Nabumetone is well-absorbed from the GI tract and undergoes significant first pass metabolism resulting in approximately 35% being converted to the active metabolite, 6-MNA. Tmax for 6-MNA varies widely with a mean values of 3 and 11 hours reported in official product monographs, and described as 9-12 hours in published literature. Administration with food increases Cmax by 33% and increases absorption rate. If formulated as a suspension the Cmax increases and the Tmax is reduced by 0.8 hours while the all other pharmacokinetic parameters remain unchanged.
volume of destribution:
The Vd of 6-MNA reported after administration of a single dose is 0.1-0.2 L/kg or approximately 5-10 L. Vdss reported in official product labeling is approximately 53 L.
protein binding:
6-MNA is over 99% bound to plasma proteins, likely albumin. The unbound fraction is 0.1-0.2% and remains proportional in the dose range of 1000-2000mg.
metabolism:
Nabumetone is reduced to 3-hydroxy nabumetone by the aldo-keto reductase-1C family and by corticosteroid 11-beta-dehydrogenase. It then undergoes oxidative cleavage by CYP1A2 to 6-MNA, the active metabolite. 6-MNA is eliminated by O-demethylation by CYP2C9 to 6-hydroxy-2-naphthylacetic acid (6-HNA). Both 6-MNA and 6-HNA are further converted to conjugates. Other metabolites are generated through a mix of ketone reduction and O-demethylation along with subsequent conjugation. Glucuronide conjugates of several metabolites have been found to become further conjugated to glycine residues.
route of elimination:
Most drug is eliminated via hepatic metabolism with minimal to no parent drug detectable in the plasma. 80% of the dose is then excreted by the kidneys and 10% in the feces. It does not appear to undergo enterohepatic recirculation.
half life:
. 6MNA has a mean half-life of 24 hours with a range of 19-36 hours

Cardiovascular risk:
Nonsteroidal anti-inflammatory drugs (NSAIDs) may increase risk of serious cardiovascular thrombotic events, myocardial infarction (MI), and stroke, which can be fatal
Risk may increase with duration of use
Patients with existing cardiovascular disease or risk factors for such disease may be at greater risk
NSAIDs are contraindicated for perioperative pain in setting of coronary artery bypass graft (CABG) surgery
Gastrointestinal risk:
NSAIDs increase risk of serious GI adverse events, including bleeding, ulceration, and gastric or intestinal perforation, which can be fatal
GI adverse events may occur at any time during use and without warning symptoms
Elderly patients are at greater risk for serious GI events

Use caution in asthma (bronchial), bleeding disorders, cardiac disease, hepatic impairment, hypertension, renal impairment
Therapy may lead to onset of new hypertension or worsening of preexisting hypertension, either of which may contribute to increased incidence of CV events; patients taking thiazides or loop diuretics may have impaired response to these therapies when taking NSAIDs; use with caution in patients with hypertension; monitor blood pressure (BP) closely during initiation of treatment and throughout the course of therapy
May not be sufficiently activated in patients with hepatic dysfunction; use with caution
Borderline elevations of 1 or more liver function tests may occur in up to15% of patients; laboratory abnormalities may progress, remain unchanged, or may be transient with continuing therapy; notable elevations of ALT or AST (approximately 3 or more times the upper limit of normal) reported in approximately 1% of patients in clinical trials with NSAIDs; If clinical signs and symptoms consistent with liver disease develop, or if systemic manifestations occur (e.g., eosinophilia, rash, etc.), discontinue therapy
Severe and potentially fatal bronchospasm may occur in patients with aspirin-sensitive asthma; contraindicated; use caution in patients with other forms of asthma
Risk of serious GI toxicity, including bleeding, ulcers, perforation; to minimize potential risk for an adverse GI event in patients receiving therapy, use lowest effective dose for shortest possible duration; discontinue therapy if adverse GI effects occur; for high risk patients, consider alternate therapies that do not involve NSAIDs
May cause drowsiness, dizziness, blured vision, and other neurologic effects
Therapy inhibits platelet aggregation and have been shown to prolong bleeding time in some patients; unlike aspirin, their effect on platelet function is quantitatively less, of shorter duration, and reversible; patients receiving therapy who may be adversely affected by alterations in platelet function, such as those with coagulation disorders or patients receiving anticoagulants, should be carefully monitored
May increase risk of serious cardiovascular (CV) thrombotic events, myocardial infarction, and stroke, which can be fatal; patients with known CV disease or risk factors for CV disease may be at greater risk; to minimize potential risk for an adverse CV event in patients treated with an NSAID, use lowest effective dose for shortest duration possible
May increase risk of hyperkalemia
Based on ultraviolet (U.V.) light photosensitivity testing, drug may be associated with more reactions to sun exposure than might be expected based on skin tanning types
Serious skin adverse events such as exfoliative dermatitis, Stevens-Johnson Syndrome (SJS), and toxic epidermal necrolysis (TEN), which can be fatal may occur without warning; patients should be informed about signs and symptoms of serious skin manifestations and use of the drug should be discontinued at first appearance of skin rash or any other sign of hypersensitivity.

Unknown whether drug is excreted in breast milk; effect on infant unknown; do not give to nursing mothers