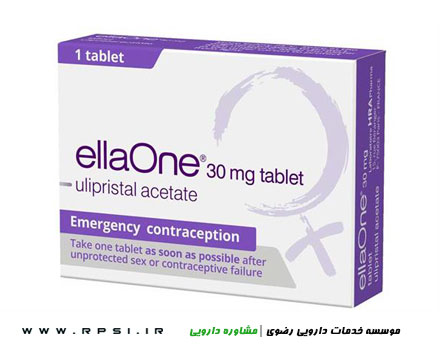 It is thought that the primary mechanism of action for emergency contraception is inhibition or delay of ovulation; however, alterations to the endometrium that may affect implantation may also occur

Ulipristal is a selective, reversible progestin receptor modulator and its tissue targets include the uterus, cervix, ovaries, and hypothalamus. Ulipristal may act as an agonist or antagonist in the presence or absence of progesterone based on the tissue target. If given mid-follicular phase, development of the follicle growth is delayed and estradiol concentrations decrease. If given at the time when luteinizing hormone peaks, follicular rapture is delayed by several days. If given early-luteal phase, a decrease in endometrial thickness can be observed.

It also binds to glucocorticoid receptor, however compared to mifepristone (a progesterone receptor antagonist), ulipristal is more tolerable and has lower glucocorticoid activity and better binding affinity.

If vomiting occurs within 3 hr after the dose, consider repeating the regimen

<18 year: Safety and efficacy not established

Not indicated for termination of existing pregnancy

Repeated use within the same menstrual cycle not recommended