Netilmicin is a semisynthetic 1-N-ethyl derivative of sisomycin, an aminoglycoside antibiotic with action similar to gentamicin, but less ear and kidney toxicity. 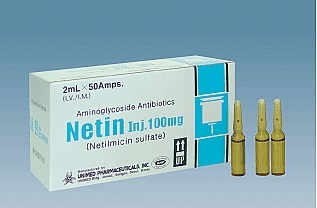 Aminoglycosides like netilmicin "irreversibly" bind to specific 30S-subunit proteins and 16S rRNA. Specifically netilmicin binds to four nucleotides of 16S rRNA and a single amino acid of protein S12. This interferes with decoding site in the vicinity of nucleotide 1400 in 16S rRNA of 30S subunit. This region interacts with the wobble base in the anticodon of tRNA.
This leads to interference with the initiation complex, misreading of mRNA so incorrect amino acids are inserted into the polypeptide leading to nonfunctional or toxic peptides and the breakup of polysomes into nonfunctional monosomes, leaving the bacterium unable to synthesize proteins vital to its growth.

Aminoglycosides are useful primarily in infections involving aerobic, Gram-negative bacteria, such as Pseudomonas, Acinetobacter, and Enterobacter. It is active at low concentrations against a wide variety of pathogenic bacteria including Escherichia coli, bacteria of the Klebsiella-Enterobacter-Serratia group, Citrobacter sp., Proteus sp. (indole-positive and indole-negative), including Proteus mirabilis, P. morganii, P. rettgrei, P. vulgaris, Pseudomonas aeruginosa and Neisseria gonorrhoea. Some strains of Providencia sp., Acinetobacter sp. and Aeromonas sp. are also sensitive to netilmicin. The combination of netilmicin and penicillin G has a synergistic bactericidal effect against most strains of Streptococcus faecalis (enterococcus). The combined effect of netilmicin and carbenicillin or ticarcillin is synergistic for many strains of Pseudomonas aeruginosa. In addition, many isolates of Serratia, which are resistant to multiple antibiotics, are inhibited by synergistic combinations of netilmicin with carbenicillin, azlocillin, mezlocillin, cefamandole, cefotaxime or moxalactam. Aminoglycosides are mostly ineffective against anaerobic bacteria, fungi and viruses.

Protein binding: Protein-binding of is low and depends on the test conditions (mainly the concentration of cations in the test medium).

Metabolism: No evidence of metabolic transformation, typically 80% is recoverable in the urine within 24 hours

Serious systemic infections: 4 to 6.5 mg/kg/day in divided doses every 8 to 12 hours.

Administration of injections preserved with benzyl alcohol has been associated with toxicity in neonates. Caution should be used when netilmicin is administered to neonates and children.

Although prolonged courses of netilmicin injection have been well tolerated, it is particularly important that patients treated for longer than the usual period be carefully monitored for changes in renal, auditory, and vestibular functions.