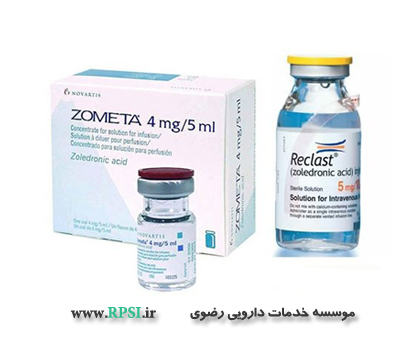 Zoledronic acid injection is a bisphosphonate and acts primarily on bone. It is an inhibitor of osteoclast-mediated bone resorption.

The selective action of bisphosphonates on bone is based on their high affinity for mineralized bone. Intravenously administered zoledronic acid rapidly partitions to bone and localizes preferentially at sites of high bone turnover. The main molecular target of zoledronic acid in the osteoclast is the enzyme farnesyl pyrophosphate synthase. The relatively long duration of action of zoledronic acid is attributable to its high binding affinity to bone mineral.

Poorly absorbed (oral absorption is about 1% of what intravenous absorption is). Approximately 22% bound in human plasma Zoledronic acid does not inhibit human P450 enzymes in vitro and does not undergo biotransformation in vivo Half life: 146 hours Clearance: Renal

Renal dysfunction , hypersensitivity to drug or its components.