A plasma alpha 2 glycoprotein that accounts for the major antithrombin activity of normal plasma and also inhibits several other enzymes. It is a member of the serpin superfamily. 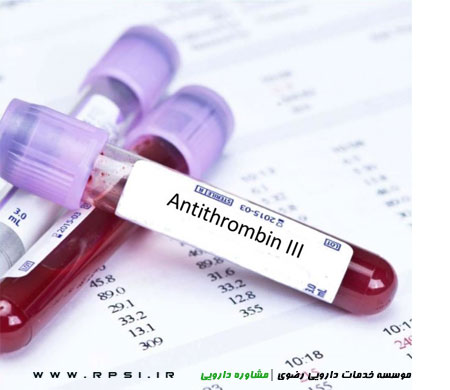 Antithrombin, an alpha2-glycoprotein of molecular weight 58,000, is normally present in human plasma at a concentration of approximately 12.5 mg/dL and is the major plasma inhibitor of thrombin. Inactivation of thrombin by AT occurs by formation of a covalent bond resulting in an inactive 1:1 stoichiometric complex between the two, involving an interaction of the active serine of thrombin and an arginine reactive site on AT. AT is also capable of inactivating other components of the coagulation cascade including factors IXa, Xa, XIa, and XIIa, as well as plasmin.
The neutralization rate of serine proteases by AT proceeds slowly in the absence of heparin, but is greatly accelerated in the presence of heparin. As the therapeutic antithrombotic effect of heparin is mediated by AT, heparin in vivo is ineffective in the absence or near absence of AT.

After administration, Antithrombin III human temporarily replaces the missing AT in patients with hereditary antithrombin deficiency.

Hereditary AT deficiency causes an increased risk of venous thromboembolism (VTE). During high-risk situations such as surgery or trauma or for pregnant women, during the peri-partum period, the risk of development of VTEs as compared to the normal population in these situations is increased by a factor 10 to 50.
In hereditary antithrombin deficient patients Antithrombin III  restores (normalize) plasma AT activity levels during peri-operative and peri-partum periods.

Route of elimination: Complexes of antithrombin III with thrombin or other proteinases cleared principally by liver and excreted in urine.