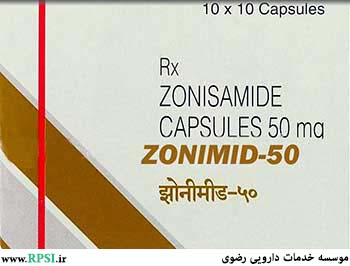 The precise mechanism(s) by which zonisamide exerts its antiseizure effect is unknown Zonisamide binds to sodium channels and voltage sensitive calcium channels, which suppresses neuronal depolarization and hypersynchronization. Zonisamide also inhibits carbonic anhydrase to a weaker extent, but such an effect is not thought to contribute substantially to the drug's anticonvulsant activity.

Zonisamide is an antiseizure drug chemically classified as a sulfonamide and unrelated to other antiseizure agents.

Following a 200 to 400 mg oral zonisamide dose, peak plasma concentrations (range: 2 to 5 mcg/mL) in normal volunteers occur within 2 to 6 hours. In the presence of food, the time to maximum concentration is delayed, occurring at 4 to 6 hours, but food has no effect on the bioavailability of zonisamide. Once a stable dose is reached, steady state is achieved within 14 days. The elimination half-life of zonisamide in plasma is about 63 hours. The elimination half-life of zonisamide in RBC is approximately 105 hours. Zonisamide is approximately 40% bound to human plasma proteins. Zonisamide is excreted primarily in urine as parent drug and as the glucuronide of a metabolite.

Usual Adult and pediatric >=16 years Dose for Seizures Initial Dose: 100 mg once a day. After two weeks, the dose may be increased to 200 mg/day as either a single or divided dose (100 mg BID) for at least two weeks. It can then be increased to 300 mg/day, then 400 mg/day either as a single daily dose or divided into two daily doses, with the dose stable for at least two weeks to achieve steady state at each level.

1- Serious Skin Reactions, Serious Hematologic Events, Oligohidrosis and Hyperthermia in Pediatric Patients, Suicidal Behavior and Ideation, Metabolic Acidosis may occure. 2-As with other AEDs, abrupt withdrawal of zonisamide in patients with epilepsy may precipitate increased seizure frequency or status epilepticus. Dose reduction or discontinuation of zonisamide should be done gradually. 3-Zonisamide is metabolized by the liver and eliminated by the kidneys; caution should therefore be exercised when administering zonisamide to patients with hepatic and renal dysfunction. 4-Somnolence is commonly reported, especially at higher doses of zonisamide.