Desvenlafaxine (O-desmethylvenlafaxine) the major active metabolite of venlafaxine, is an antidepressant from the serotonin norepinephrine reuptake inhibitor (SNRI) class. Desvenlafaxine may be used to treat major depressive disorder. 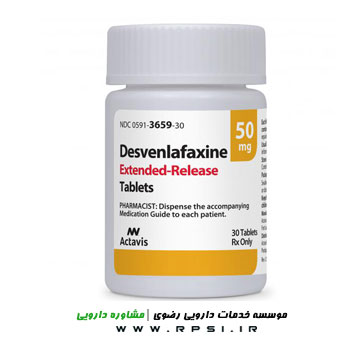 Desvenlafaxine is a selective serotonin and norepinephrine reuptake inhibitor. It lacks significant activity on muscarinic-cholinergic, H1-histaminergic, or α1-adrenergic receptors in vitro. Desvenlafaxine does not appear to exert activity against calcium, chloride, potassium and sodium ion channels and also lacks monoamine oxidase (MAO) inhibitory activity. It was also shown to lack significant activity again the cardiac potassium channel, hERG, in vitro. Compared to other SNRIs, desvenlafaxine undergoes simple metabolism, has a low risk of drug-drug interactions and does not have to be extensively titrated to reach a therapeutic dose.

Higher dosages, up to 400 mg/day, have been used but have not been proved more efficacious; increased side effects have been reported

Concomitant with MAOIs , excessive sensitivity to the drug or its component

Risk of mydriasis; may trigger angle closure attack in patients with angle closure glaucoma with anatomically narrow angles without a patent iridectomy

Use caution in patients with history of seizure disorders

Screen patients for bipolar disorder; risk of mixed or manic episodes is increased in patients treated with antidepressants

Cardiovascular, cerebrovascular or lipid metabolism disorders; monitor patients who have history of or are at risk for these disorders

Hyponatremia due to syndrome of inappropriate antidiuretic hormone (SIADH); cases of serum sodium ≤110 mmol/L have been reported; monitor patients who are taking diuretics or at risk for volume depletion

In children and young adults, initiate only if benefits greatly outweigh risks

Monitor closely for changes in behavior, clinical worsening, and suicidal tendencies during initial 1-2 months of therapy and dosage adjustments

Not approved for use in pediatric patients

Follow all directions on your prescription label and read all medication guides or instruction sheets. Use the medicine exactly as directed.

Take desvenlafaxine with water at the same time each day, with or without food.

Swallow the tablet whole and do not crush, chew, or break it.

Your blood pressure will need to be checked often.

It may take several weeks before your symptoms improve. Do not stop using desvenlafaxine without first talking to your doctor. You may have unpleasant side effects if you stop taking this medicine suddenly.

Some tablet forms of desvenlafaxine are made with a shell that is not absorbed or melted in the body. Part of the tablet shell may appear in your stool. This is a normal side effect and will not make the medicine less effective.

Take the medicine as soon as you can, but skip the missed dose if it is almost time for your next dose. Do not take two doses at one time.