Milnacipran is a selective serotonin and norepinephrine reuptake inhibitor (SNRI) and like many agents in this category was originally developed for and continues to be approved and indicated for the treatment of depression . Furthermore, in 2009 the US FDA approved milnacipran for the additional indication of treating fibromyalgia. 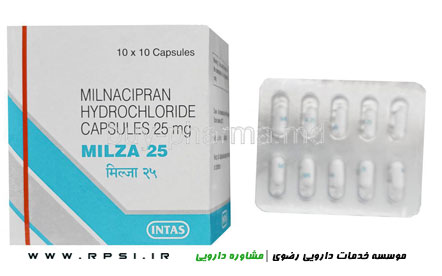 The dual ability for milnacipran to inhibit the reuptake of both serotonin (5HT) and norepinephrine (NE) facilitates its treatment of both fibromyalgia and major depressive disorder (MDD).

In particular, it is generally believed that 5HT and NE participate in the modulation of endogenous analgesic mechanisms by way of the descending inhibitory pain pathways in the brain and spinal cord . some studies have proposed that low levels of 5HT may be associated with increased sensitivity to pain - a condition that could subsequently be improved by milnacipran's capacity to enhance the presence of 5HT by inhibiting its reuptake via serotonin transporters at synaptic clefts . Furthermore, in the CNS it is also generally believed that NE released from descending pathways can mitigate pain sensations via eliciting inhibitory effects on alpha-2A-adrenoceptors on central terminals of primary afferent nociceptors, by direct alpha-2-adrenergic action on pain-relay neurons, and by alpha-1-adrenoceptor-mediated activation of inhibitory interneurons.

it appears that the agent can cause increases in heart rate and blood pressure.

<17 years: Safety and efficacy not established

Potentially life-threatening serotonin syndrome has been reported with both SNRIs and selective serotonin reuptake inhibitors (SSRIs) when these agents are taken alone, but especially when they are coadministered with other serotonergic agents; thus, patient medications should be thoroughly reviewed for other serotonergic drugs (eg, tryptophan supplements, tramadol, serotonin agonists [triptans], MAOIs, tricyclic antidepressants [TCAs], SSRIs, methylene blue, buspirone, amphetamines, linezolid)

May increase blood pressure (BP) or heart rate (HR); BP should be controlled before initiation of milnacipran; BP and HR should be monitored while patient is taking drug

SSRIs and SNRIs may impair platelet aggregation and increase the risk of bleeding events, ranging from ecchymoses, hematomas, epistaxis, petechiae, and GI hemorrhage to life-threatening hemorrhage; concomitant use of aspirin, NSAIDs, warfarin, other anticoagulants, or other drugs known to affect platelet function may add to this risk

Neonates exposed to SNRIs or SSRIs late in third trimester are at risk for complications such as feeding difficulties, irritability, and respiratory problems

Use caution in patients with history of seizures

Avoid use in severe hepatic impairment

ESRD: Use not recommended

This increase was not seen in patients aged >24 years; slight decrease in suicidal thinking was seen in adults aged >65 years

In children and young adults, risks must be weighed against benefits of taking antidepressants

Patients should be monitored closely for changes in behavior, clinical worsening, and suicidal tendencies; this should be done during initial 1-2 months of therapy and dosage adjustments

Drug is not approved for use in pediatric patients