Bendamustine is a nitrogen mustard drug indicated for use in the treatment of chronic lymphocytic leukemia (CLL) and indolent B-cell non-Hodgkin lymphoma (NHL) that has progressed during or within six months of treatment with rituximab or a rituximab-containing regimen. 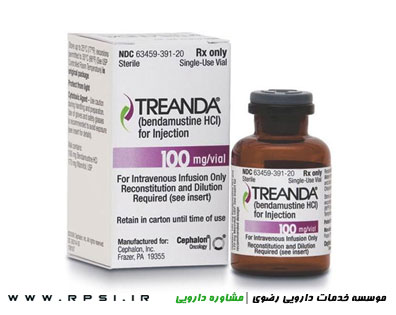 Bendamustine is a bifunctional mechlorethamine derivative capable of forming electrophilic alkyl groups that covalently bond to other molecules. Through this function as an alkylating agent, bendamustine causes intra- and inter-strand crosslinks between DNA bases resulting in cell death. It is active against both active and quiescent cells, although the exact mechanism of action is unknown.

No mean changes in QTc interval greater than 20 milliseconds were detected up to one hour post-infusion.

Time to peak (serum): At end of infusion

Monitor for fever and other signs of infection and treat promptly

Fatal and serious skin reactions have been reported with bendamustine treatment in clinical trials and postmarketing safety reports, including toxic skin reactions [Stevens-Johnson Syndrome (SJS), toxic epidermal necrolysis (TEN), and drug reaction with eosinophilia and systemic symptoms (DRESS)], bullous exanthema, and rash; events occurred when given as a single agent and in combination with other anticancer agents or allopurinol; monitor patients with skin reactions closely; if skin reactions are severe or progressive, withhold or discontinue bendamustine hydrochloride injection

Tumor lysis syndrome reported with use; onset tends to be within first treatment cycle of bendamustine hydrochloride and, without intervention, may lead to acute renal failure and death; preventive measures include vigorous hydration and close monitoring of blood chemistry, particularly potassium and uric acid levels

Monitor liver chemistry tests prior to and during treatment

Erythema and maked swelling can occur with extravasation; assure good venous access and monitor infusion site during and after administration

Fetal harm can occur when administered to a pregnant woman; women should be advised to avoid becoming pregnant when receiving bendamustine

Increased risk for reactivation of infections including (but not limited to) hepatitis B, cytomegalovirus, Mycobacterium tuberculosis, and herpes zoster; patients should undergo appropriate measures (including clinical and laboratory monitoring, prophylaxis, and treatment) for infection and infection reactivation prior to administration