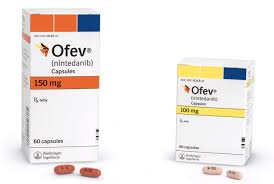 By competitively and reversibly inhibiting the adenosine triphosphate binding pocket of the receptor tyrosine kinases VEGFR, FGFR and PDGFR, nintedanib blocks the intracellular signalling needed for the proliferation, migration and transformation of fibroblasts.

Hydrolytic cleavage by esterases resulting in the free acid moiety BIBF 1202 is the prevalent metabolic pathway (~25%); BIBF 1202 is subsequently glucuronidated by UGT enzymes, namely UGT 1A1, UGT 1A7, UGT 1A8, and UGT 1A10 to BIBF 1202 glucuronide

Only a minor extent of the biotransformation consists of CYP pathways (~5%), with CYP3A4 being the predominant enzyme involved

Diarrhea, nausea, and/or vomiting may occur; treat with adequate hydration and antidiarrheal/antiemetic medications; if persists, treatment interruption and dose reduction may be needed

May increased risk of bleeding or gastrointestinal perforation (based on mechanism of action [VEGFR inhibition]); monitor for bleeding if on full anticoagulant therapy and adjust anticoagulation treatment as needed

In postmarketing period non-serious and serious bleeding events reported; use therapy in patients with known risk of bleeding only if anticipated benefit outweighs potential risk