Levobetaxolol is a beta-blocker used to lower the pressure in the eye to treat conditions such as glaucoma. It has been discontinued. 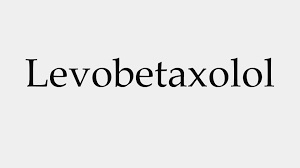 Levobetaxolol does not have significant membrane-stabilizing (local anesthetic) activity.

Absorption: Systemic absorption has occurred to some degree with other beta adrenergic blocking agents.

Duration of action: Approximately 12 hours, after a single topical dose

Usual Adult Dose
Open-angle glaucoma or Ocular hypertension
Topical, to the conjunctiva, 1 drop into the affected eye, two times a day
Usual Pediatric Dose
Safety and efficacy have not been established for the use of levobetaxolol in children


» Cardiac failure, history of or
Heart block, history of   (in clinical studies, levobetaxolol has been shown to have a minor effect on heart rate and blood pressure; treatment should be discontinued at the first signs of cardiac failure)


Glaucoma, angle-closure (when used to reduce elevated intraocular pressure, levobetaxolol must be used with a miotic agent because if it is used alone, it is expected to have little or no effect on the pupil)


Surgery, major    (gradual withdrawal of beta-adrenergic receptor blocking agents may be indicated prior to induction of general anesthesia due to the potential for impairment of the cardiac response to beta-adrenergically mediated sympathetic reflex stimuli)


» Thyrotoxicosis (certain signs and symptoms of hyperthyroidism, such as tachycardia, may be masked by beta-adrenergic blocking agents; abrupt withdrawal may precipitate a thyroid storm)

Applying the missed dose as soon as possible; if almost time for next dose, skipping missed dose and going back to regular dosing schedule; not doubling doses

» Diabetic patients: May mask some signs of hypoglycemia