An indole derivative effective in schizophrenia and other psychoses and possibly useful in the treatment of the aggressive type of undersocialized conduct disorder. 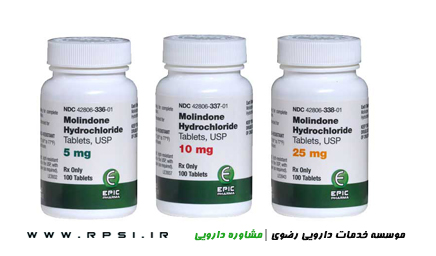 The exact mechanism has not been established, however, based on electroencephalogram (EEG) studies, molindone is thought to act by occupying (antagonizing) dopamine (D2) receptor sites in the reticular limbic systems in the brain, thus decreasing dopamine activity. Decreased dopamine activity results in decreased physiological effects normally induced by excessive dopamine stimulation, such as those typically seen in manifestations of psychotic disorders.

Molindone has a pharmacological profile in laboratory animals which predominantly resembles that of major tranquilizers causing reduction of spontaneous locomotion and aggressiveness, suppression of a conditioned response and antagonism of the bizarre stereotyped behavior and hyperactivity induced by amphetamines. In addition, molindone antagonizes the depression caused by the tranquilizing agent tetrabenazine.

Initial: 50-75 mg PO qDay; increase to 100 mg/day in 3-4 days; may titrate up or down based on severity of symptomatology and individual patient response

May cause somnolence, postural hypotension, motor instability and sensory instability, which may lead to falls and, consequently, fractures or other injuries; complete fall-risk assessments for patients with diseases, conditions, or medications that could exacerbate these effects, when initiating antipsychotic treatment and recurrently for patients on long-term antipsychotic therapy

Neuroleptic malignant syndrome (NMS) reported with antipsychotic drug use; immediately discontinue therapy if it occurs along with nonessential concurrent therapy and administer intensive symptomatic treatment and monitor carefully; if patient requires antipsychotic drug treatment after recovery from NMS, it should be considered carefully and the patient monitored closely since recurrences of NMS have been reported

May cause drowsiness initially; advise patient against activities requiring mental alertness until response to the drug has been established

Convulsive seizures reported with use

Preparation contains calcium sulfate as an excipient; calcium ions may interfere with absorption of preparations containing phenytoin sodium and tetracyclines

Therapy may obscure signs of intestinal obstruction or brain tumor

Antipsychotic drugs elevate prolactin levels; elevation persists during long-term administration; although disturbances such as galactorrhea, amenorrhea, gynecomastia, and impotence have been reported, clinical significance of elevated serum prolactin levels is unknown for most patients

Patients with dementia-related psychosis who are treated with antipsychotic drugs are at an increased risk for death, as shown in short-term controlled trials; deaths in trials appeared to be either cardiovascular (eg, heart failure, sudden death) or infectious (eg, pneumonia) in nature

Not approved for treatment of patients with dementia-related psychosis