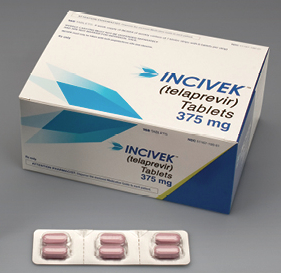 Food: AUC increased by 237% when administered with a standard fat meal (containing 533 kcal and 21 g fat) compared with fasting conditions

Extensively metabolized in liver by hydrolysis, oxidation, and reduction

Metabolites: R-diastereomer of telaprevir (30-fold less active), pyrazinoic acid, and a metabolite that underwent reduction at the alpha-ketoamide bond of telaprevir (not active) were found to be the predominant metabolites

Metabolized by CYP3A4 is the major CYP isoform; after multiple dosing, nonCYP metabolism is also apparent

Substrate of CYP3A and P-gp

Among both treatment-naïve and previous treatment failures, subjects of all IL28B genotypes (ie, CT, TT, CC) appeared to have higher SVR rates with telaprevir-containing regimens in clinical trials compared with dual therapy

Not recommended for with moderate-to-severe hepatic impairment (Child-Pugh B or C, score 7 or greater) or with decompensated liver disease

Deaths reported when patients continued to receive this treatment regimen after developing a worsening, or progressive rash and systemic symptoms

Patients should be promptly referred for urgent medical care

You may bleed more easily. Be careful and avoid injury. Use a soft toothbrush and an electric razor.

Do not take St John's wort with telaprevir. This medicine may not work as well.

This medicine does not stop the spread of diseases like HIV or hepatitis that are passed through blood or having sex. Do not have any kind of sex without using a latex or polyurethane condom. Do not share needles or other things like toothbrushes or razors. Talk with your doctor.

This medicine may cause harm to the unborn baby if you take it while you are pregnant.

Use 2 kinds of birth control that you can trust while using telaprevir and for 6 months after stopping telaprevir.

If you are a man and have sex with a female who could get pregnant, protect her from pregnancy during care and for 6 months after care ends. Use birth control that you can trust.

Do not use a hormone-related kind of birth control.

Tell your doctor if you are breast-feeding. You will need to talk about any risks to your baby.