Cimetidine is in a group of drugs called histamine receptor antagonists. Cimetidine works by decreasing the amount of acid your stomach produces. Cimetidine is used to treat and prevent certain types of ulcer, and to treat conditions that cause the stomach to produce too much acid. Cimetidine is also used to treat gastroesophageal reflux disease (GERD), when stomach acid backs up into the esophagus and causes heartburn. 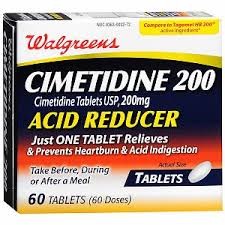 Cimetidine competitively inhibits the action of histamine at the histamine H2 receptors of the parietal cells and thus is a histamine H2-receptor antagonist. Cimetidine is not an anticholinergic agent.

Cimetidine is a histamine H2-receptor antagonist. It reduces basal and nocturnal gastric acid secretion and a reduction in gastric volume, acidity, and amount of gastric acid released in response to stimuli including food, caffeine, insulin, betazole, or pentagastrin.

1-There have been rare reports of transient healing of gastric ulcers despite subsequently documented malignancy. 2-Reversible confusional states have been observed on occasion, predominantly, but not exclusively, in severely ill patients. 3- Advancing age (50 or more years) and preexisting liver and/or renal disease appear to be contributing factors

A total of 6 to 8 weeks is usually sufficient for ulcer healing. Gastroesophageal reflux disease usually requires 8 to 12 weeks for healing. Erosive esophagitis therapy generally should not exceed 12 weeks.