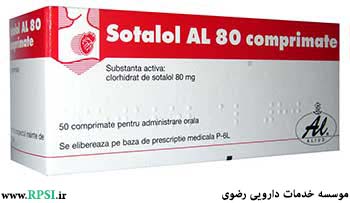 Sotalol hydrochloride has both beta-adrenoreceptor blocking (Vaughan Williams Class II) and cardiac action potential duration prolongation (Vaughan Williams Class III) antiarrhythmic properties. Sotalol hydrochloride is a racemic mixture of d- and l-Sotalol. Both isomers have similar Class III antiarrhythmic effects, while the l-isomer is responsible for virtually all of the beta-blocking activity.

Sotalol is an antiarrhythmic drug. It falls into the class of beta blockers (and class II antiarrhythmic agents) because of its primary action on the β-adrenergic receptors in the heart.
In addition to its actions on the beta receptors in the heart, sotalol inhibits the inward potassium ion channels of the heart. In so doing, sotalol prolongs repolarization, therefore lengthening the QT interval and decreasing automaticity. It also slows atrioventricular (AV) nodal conduction.
Because of these actions on the cardiac action potential, it is also considered a class III antiarrhythmic agent.

In healthy subjects, the oral bioavailability of Sotalol hydrochloride is 90 to 100%.
After oral administration. Sotalol hydrochloride does not bind to plasma proteins and is not metabolized.
steady-state plasma concentrations are attained within 2 to 3 days. Excretion is predominantly via the kidney in the unchanged form.

Usual Adult Dose for Ventricular Arrhythmia Oral Initial: 80 mg twice daily The initial dose may be increased 120 to 160 mg twice daily. The dosage should be adjusted gradually allowing 3 days between dosing increments in order to attain steady-state plasma concentrations and to allow monitoring of QT intervals.
Graded dose adjustment will help prevent doses that are higher than necessary to control the arrhythmia. Most patients obtain a therapeutic response with a total daily dose of 160 to 320 mg given in two or three divided doses.

1- Like other antiarrhythmic agents, Sotalol can provoke new or worsened ventricular arrhythmias in some patients, including sustained ventricular tachycardia or ventricular fibrillation, with potentially fatal consequences.
2- Sympathetic stimulation is necessary in supporting circulatory function in congestive heart failure, and beta-blockade carries the potential hazard of further depressing myocardial contractility and precipitating more severe failure.
3- Sotalol should not be used in patients with hypokalemia or hypomagnesemia prior to correction of imbalance.
4- Excessive prolongation of the QT interval (> 550 msec) can promote serious arrhythmias and should be avoided .
5- In the first 2 weeks post-MI caution is advised and careful dose titration is especially important, particularly in patients with markedly impaired ventricular function.
6- While taking beta-blockers, patients with a history of anaphylactic reaction to a variety of allergens may have a more severe reaction on repeated challenge.
7- Chronically administered beta-blocking therapy should not be routinely withdrawn prior to major surgery.
8- In patients with diabetes (especially labile diabetes) or with a history of episodes of spontaneous hypoglycemia, Sotalol should be given with caution since beta-blockade may mask some important premonitory signs of acute hypoglycemia; e.g., tachycardia.
9- Sotalol should be used only with extreme caution in patients with sick sinus syndrome associated with symptomatic arrhythmias, because it may cause sinus bradycardia, sinus pauses or sinus arrest.
10- Beta-blockade may mask certain clinical signs (e.g., tachycardia) of hyperthyroidism. Patients suspected of developing thyrotoxicosis should be managed carefully to avoid abrupt withdrawal of beta-blockade which might be followed by an exacerbation of symptoms of hyperthyroidism, including thyroid storm.

1- Do not take an antacid that has aluminum or magnesium in it within 2 hours before or after you take sotalol. 2- Continue to use sotalol even if you feel well. Do not miss any doses. 3- Sotalol may cause dizziness or light-headedness. These effects may be worse if you take it with alcohol or certain medicines. Use sotalol with caution. Do not drive or perform other possibly unsafe tasks until you know how you react to it. 4- Do not suddenly stop taking sotalol. Sharp chest pain, irregular heartbeat, and, sometimes, heart attack may occur if you suddenly stop sotalol.