Sevelamer is a phosphate binder. Sevelamer helps prevent hypocalcemia (low levels of calcium in the body) caused by elevated phosphorus. Sevelamer is used to control phosphorus levels in people with chronic kidney disease who are on dialysis. 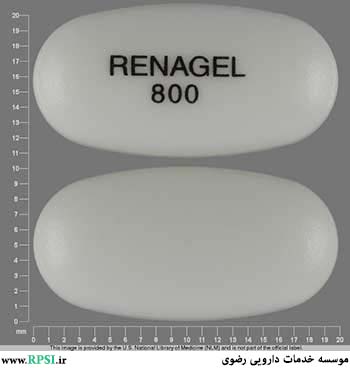 Sevelamer carbonate tablets and powder contain Sevelamer carbonate, a non-absorbed phosphate binding crosslinked polymer, free of metal and calcium. It contains multiple amines separated by one carbon from the polymer backbone. These amines exist in a protonated form in the intestine and interact with phosphate molecules through ionic and hydrogen bonding. By binding phosphate in the gastrointestinal tract and decreasing absorption, Sevelamer carbonate lowers the phosphate concentration in the serum (serum phosphorus)

In addition to effects on serum phosphorus levels, Sevelamer hydrochloride has been shown to bind bile acids. Sevelamer binds bile acids, it may interfere with normal fat absorption and thus may reduce absorption of fat soluble vitamins such as A, D and K.

hypersensitivity to drug or its components. , bowel obstruction

1- Cases of dysphagia and esophageal tablet retention have been reported in association with use of the tablet formulation of Sevelamer, some requiring hospitalization and intervention. Consider using Sevelamer suspension in patients with a history of swallowing disorders. 2- Cases of bowel obstruction and perforation have also been reported with Sevelamer use 3- Patients with dysphagia, swallowing disorders, severe gastrointestinal (GI) motility disorders including severe constipation, or major GI tract surgery were not included in the Sevelamer carbonate clinical studies

1- Bicarbonate and chloride levels should be monitored 2- Monitor for Reduced Vitamins D, E, K (clotting factors) and Folic Acid Levels 3-Inform patients to take Sevelamer carbonate as directed with meals and adhere to their prescribed diets