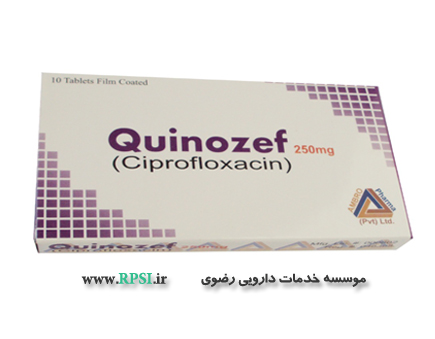 the bactericidal action of ciprofloxacin results from inhibition of the enzymes topoisomerase II (DNA gyrase) and topoisomerase IV, which are required for bacterial DNA replication, transcription, repair, strand supercoiling repair, and recombination.

Ciprofloxacin is a broad-spectrum antiinfective agent of the fluoroquinolone class. Ciprofloxacin has in vitro activity against a wide range of gram-negative and gram-positive microorganisms.

Rapidly and well absorbed from the gastrointestinal tract after oral administration. The absolute bioavailability is approximately 70% with no substantial loss by first pass metabolism. Protein binding:20-40%.Metabolism: Hepatic. Approximately 40 to 50% of an orally administered dose is excreted in the urine as unchanged drug.Half life:4 h.

1-Fluoroquinolones, including Cipro IV, are associated with an increased risk of tendinitis and tendon rupture in all ages. 2-Fluoroquinolones, including Cipro IV, have neuromuscular blocking activity and may exacerbate muscle weakness in persons with myasthenia gravis. 3-Serious and occasionally fatal hypersensitivity (anaphylactic) reactions, some following the first dose, have been reported in patients receiving quinolone therapy. 4-Some fluoroquinolones, including Cipro IV, have been associated with prolongation of the QT interval on the electrocardiogram and infrequent cases of arrhythmia. 5-Ciprofloxacin is an inhibitor of the hepatic CYP1A2 enzyme pathway. Coadministration of ciprofloxacin and other drugs primarily metabolized by CYP1A2 (for example, theophylline, methylxanthines, caffeine, tizanidine, ropinirole, clozapine, olanzapine) results in increased plasma concentrations of the coadministered drug and could lead to clinically significant pharmacodynamic side effects of the coadministered drug

1-To contact their healthcare provider if they experience pain, swelling, or inflammation of a tendon, or weakness or inability to use one of their joints; rest and refrain from exercise; and discontinue Cipro IV treatment. The risk of severe tendon disorder with fluoroquinolones is higher in older patients usually over 60 years of age, in patients taking corticosteroid drugs, and in patients with kidney, heart or lung transplants. 2-That photosensitivity/phototoxicity has been reported in patients receiving quinolones. Patients should minimize or avoid exposure to natural or artificial sunlight. 3-That ciprofloxacin may cause dizziness and lightheadedness; therefore, patients should know how they react to this drug before they operate an automobile or machinery or engage in activities requiring mental alertness or coordination. 4-That convulsions have been reported in patients taking quinolones, including ciprofloxacin, and to notify their physician before taking this drug if there is a history of this condition. 5-That diarrhea is a common problem caused by antibiotics which usually ends when the antibiotic is discontinued. Sometimes after starting treatment with antibiotics, patients can develop watery and bloody stools (with or without stomach cramps and fever) even as late as two or more months after having taken the last dose of the antibiotic. If this occurs, patients should contact their physician as soon as possible.