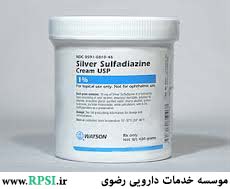 Silver sulfadiazine has broad antimicrobial activity. It is bactericidal for many gram-negative and gram-positive bacteria as well as being effective against yeast.

Very limited penetration through the skin. Only when applied to very large area burns is absorption into the body generally an issue.

Usual Adult Dose for Burns - External Apply to affected areas once or twice a day to a thickness of approximately 1/16 inch.

hypersensitivity to drug or its components. , premature infants , newborn infants during the first 2 months of life , pregnant women approaching or at term

1-Absorption of silver sulfadiazine varies depending upon the percent of body surface area and the extent of the tissue damage.it is possible that any adverse reaction associated with sulfonamides may occur. Some of the reactions which have been associated with sulfonamides are as follows:blood dyscrasias including agranulocytosis, aplastic anemia, thrombocytopenia, leukopenia, and hemolytic anemia; dermatologic and allergic reactions, including life-threatening cutaneous reactions [Stevens-Johnson syndrome (SJS), toxic epidermal necrolysis (TEN) and exfoliative dermatitis]; gastrointestinal reactions, hepatitis and hepatocellular necrosis; CNS reactions; and toxic nephrosis.. 2- If allergic reactions attributable to treatment with silver sulfadiazine occur, continuation of therapy must be weighed against the potential hazards of the particular allergic reaction. 3- The use of Silver Sulfadiazine Cream, USP 1% in some cases of glucose-6-phosphate dehydrogenase-deficient individuals may be hazardous, as hemolysis may occur.

1-Treatment should be continued until satisfactory healing has occurred or until the burn site is ready for grafting. 2- Silver sulfadiazine topical should be applied under sterile conditions.