Cilostazol widens arteries that supply blood to the legs. Cilostazol also improves circulation by keeping platelets in the blood from sticking together and clotting. Cilostazol is used to treat the symptoms of intermittent claudication. This condition causes reduced blood flow to the legs, leading to pain while walking. Cilostazol improves your ability to walk longer distances without pain. 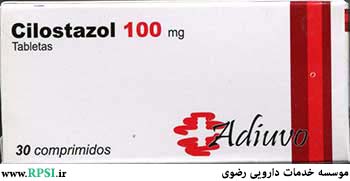 Cilostazol and several of its metabolites are cyclic AMP (cAMP) phosphodiesterase III inhibitors (PDE III inhibitors), inhibiting phosphodiesterase activity and suppressing cAMP degradation with a resultant increase in cAMP in platelets and blood vessels, leading to inhibition of platelet aggregation and vasodilation, respectively.

Cilostazol is absorbed after oral administration. A high fat meal increases absorption, with an approximately 90% increase in Cmax and a 25% increase in AUC. Cilostazol is 95 to 98% protein bound, predominantly to albumin. Cilostazol is extensively metabolized by hepatic cytochrome P-450 enzymes. metabolites largely excreted in urine. Cilostazol and its active metabolites have apparent elimination half-lives of about 11 to 13 hours.

Usual Adult Dose for Intermittent Claudication 100 mg orally twice a day administered at least 30 minutes before or 2 hours after breakfast and dinner.

1-Rare cases have been reported of thrombocytopenia or leukopenia progressing to agranulocytosis when Cilostazol was not immediately discontinued. The agranulocytosis, however, was reversible on discontinuation of Cilostazol.. 2-There is limited information with respect to the efficacy or safety of the concurrent use of Cilostazol and clopidogrel, a platelet-aggregation inhibiting drug indicated for use in patients with peripheral arterial disease. Although it cannot be determined whether there was an additive effect on bleeding times during concomitant administration with Cilostazol and clopidogrel, caution is advised for checking bleeding times during coadministration.

1- take Cilostazol tablets at least one-half hour before or two hours after food. 2- that the beneficial effects of Cilostazol tablets on the symptoms of intermittent claudication may not be immediate. Although the patient may experience benefit in 2 to 4 weeks after initiation of therapy, treatment for up to 12 weeks may be required before a beneficial effect is experienced