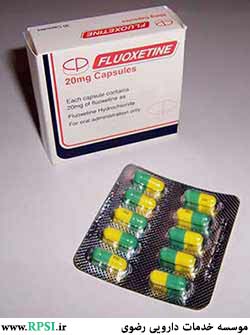 The antidepressant, antiobsessive-compulsive, and antibulimic actions of Fluoxetine are presumed to be linked to its inhibition of CNS neuronal uptake of serotonin.

Well absorbed from the GI tract following oral administration. approximately 94.5% of Fluoxetine is bound in vitro to human serum proteins. Fluoxetine is extensively metabolized in the liver to norFluoxetine and a number of other unidentified metabolites. The primary route of elimination appears to be hepatic metabolism to inactive metabolites excreted by the kidney. Half life: 1-3 days [acute administration].

1-Patients with major depressive disorder (MDD), both adult and pediatric, may experience worsening of their depression and/or the emergence of suicidal ideation and behavior (suicidality) or unusual changes in behavior. 2- Fluoxetine is not approved for use in treating bipolar depression. 3-Rash and Possibly Allergic Events 4-The development of a potentially life-threatening serotonin syndrome or Neuroleptic Malignant Syndrome (NMS)-like reactions have been reported with SSRIs, including Fluoxetine Tablets USP treatment

1-SSRIs and SNRIs, including Fluoxetine, may increase the risk of bleeding events. Patients should be cautioned about the risk of bleeding associated with the concomitant use of Fluoxetine and NSAIDs, aspirin, or other drugs that affect coagulation. 2-Significant weight loss, especially in underweight depressed or bulimic patients may be an undesirable result of treatment with Fluoxetine. 3-Hyponatremia may occur as a result of treatment with SSRIs and SNRIs, including Fluoxetine. this hyponatremia appears to be the result of the syndrome of inappropriate antidiuretic hormone secretion (SIADH). 4- Fluoxetine should be introduced with care in patients with a history of seizures