Fexofenadine hydrochloride (Allegra) is an antihistamine drug used in the treatment of hayfever and similar allergy symptoms. It was developed as a successor of and alternative to terfenadine.
Fexofenadine, like other second and third-generation antihistamines, does not readily pass through the blood-brain barrier, and so causes less drowsiness than first-generation histamine-receptor antagonists. 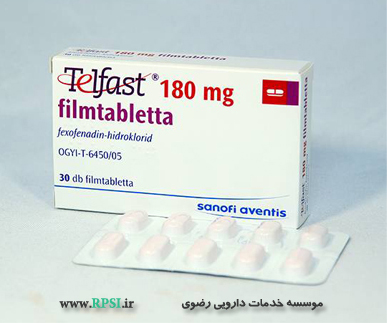 Fexofenadine is a second-generation, long lasting H1-receptor antagonist (antihistamine) which has a selective and peripheral H1-antagonist action. Histamine is a chemical that causes many of the signs that are part of allergic reactions, such as the swelling of tissues. Histamine is released from histamine-storing cells (mast cells) and attaches to other cells that have receptors for histamine. The attachment of the histamine to the receptors causes the cell to be "activated," releasing other chemicals which produce the effects that we associate with allergy.
Fexofenadine blocks one type of receptor for histamine (the H1 receptor) and thus prevents activation of cells by histamine. Unlike most other antihistamines, Fexofenadine does not enter the brain from the blood and, therefore, does not cause drowsiness. Fexofenadine lacks the cardiotoxic potential of terfenadine, since it does not block the potassium channel involved in repolarization of cardiac cells.

• Avoid taking this medicine with fruit juice.
• Do not take antacids that have magnesium or aluminum at the same time as this medicine ( fexofenadine orally disintegrating tablets). Talk with your doctor or pharmacist.
• Take on an empty stomach. Take 1 hour before or 2 hours after meals.
• Do not take this medicine out of the blister pack until you are ready to take it. Take this medicine (fexofenadine orally disintegrating tablets) right away after opening the blister pack. Do not store the removed drug for future use.
• Do not push the tablet out of the foil when opening. Use dry hands to take it from the foil. Place on your tongue and let it melt. Water is not needed. Do not swallow it whole. Do not chew, break, or crush it.