Iodixanol is in a group of drugs called radiopaque (RAY dee oh payk) contrast agents. Iodixanol contains iodine, a substance that absorbs x-rays. Radiopaque contrast agents are used to allow blood vessels, organs, and other non-bony tissues to be seen more clearly on a CT scan or other radiologic (x-ray) examination. Iodixanol is used to help diagnose certain disorders of the brain, blood vessels, and kidneys. 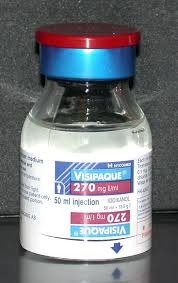 Organic iodine compounds attenuate x-rays as they pass through the body, thereby allowing the body structures containing iodine to be delineated in contrast to those structures that do not contain iodine. The degree of opacity produced by these compounds is directly proportional to the total amount (concentration and volume) of the iodinated contrast agent in the path of the x-rays. After intravascular administration, iodixanol makes opaque those internal structures in its path of flow, allowing their visualization until significant hemodilution and elimination occur.

Iodixanol is a contrast agent commonly used during coronary angiography, particularly in individuals with renal dysfunction, as it is believed to be less toxic to the kidneys than most other intravascular contrast agents. It is an iso-osmolar contrast agent

Protein binding:Negligible Excreted unchanged. In adults, approximately 97% of the injected dose of iodixanol is excreted unchanged in urine within 24 hours, with less than 2% excreted in feces within five days post-injection. Half life:2.1 hours.

Iodixanol should not be given to a child who has recently used a laxative (stool softener) or has not eaten properly.

Do not allow yourself to become dehydrated during the first few days after receiving iodixanol. Call your doctor if you have any vomiting or diarrhea during this time