Lansoprazole belongs to a group of drugs called proton pump inhibitors. It decreases the amount of acid produced in the stomach. Lansoprazole is used to treat and prevent stomach and intestinal ulcers, erosive esophagitis (damage to the esophagus from stomach acid), and other conditions involving excessive stomach acid such as Zollinger-Ellison syndrome. Over-the-counter lansoprazole (Prevacid OTC) is used to treat frequent heartburn that happens 2 or more days per week. Lansoprazole is not for immediate relief of heartburn symptoms. 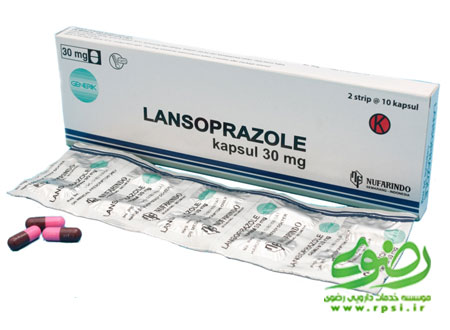 suppress gastric acid secretion by specific inhibition of the (H+,K+)-ATPase enzyme system at the secretory surface of the gastric parietal cell.

The absorption of lansoprazole is rapid, with mean Cmax occurring approximately 1.7 hours after oral dosing, and relatively complete with absolute bioavailability over 80%. Protein binding: 97%. Metabolism: Hepatic. Following single-dose oral administration of PREVACID, virtually no unchanged lansoprazole was excreted in the urine. In one study, after a single oral dose of 14C-lansoprazole, approximately one-third of the administered radiation was excreted in the urine and two-thirds was recovered in the feces. This implies a significant biliary excretion of the lansoprazole metabolites. Half life: 1.5 (± 1.0) hours.

1-Symptomatic response to therapy with Lansoprazole does not preclude the presence of gastric malignancy.
2-Atrophic gastritis has been noted occasionally in gastric corpus biopsies from patients treated long-term with Lansoprazole.
3-Acute interstitial nephritis has been observed in patients taking PPIs including Lansoprazole.
4-Daily treatment with any acid-suppressing medications over a long period of time (e.g., longer than 3 years) may lead to malabsorption of cyanocobalamin (vitamin B-12) caused by hypo-or achlorhydria.