Divalproex sodium comes in different pill forms that are for different uses. 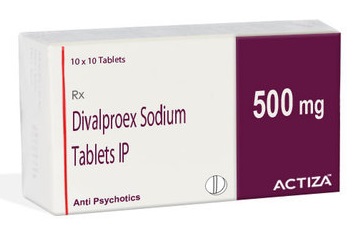 Divalproex is converted to valproic acid in the stomach. Scientists do not know the mechanism of action of valproic acid. The most popular theory is that valproic acid exerts its effects by increasing the concentration of gamma-aminobutyric acid (GABA) in the brain. GABA is a neurotransmitter, a chemical that nerves use to communicate with one another.

The intravenous and oral forms of valproic acid are expected to produce the same AUC, Cmax, and Cmin at steady-state
Most drug is metabolized to glucuronide conjugates (30-50%) of the parent drug or of metabolites
Most drug is eliminated through hepatic metabolism, about 30-50%.Label The other major contributing pathway is mitochondrial β-oxidation, about 40%. Other oxidative pathways make up an additional 15-20%. Less than 3% is excreted unchanged in the urine

COMPLEX PARTIAL SEIZURES:
Initial Dose: 10 to 15 mg/kg/day orally (see below for frequency)
-Increase in increments of 5 to 10 mg/kg/week to achieve optimal clinical response;
-Plasma levels should be checked if satisfactory response has not been achieved (usual accepted therapeutic range 50 to 100 mcg/mL)
Maximum dose: 60 mg/kg/day

SIMPLE AND COMPLEX ABSENCE SEIZURES:
Initial Therapy: 15 mg/kg/day orally (see below for frequency)
-Increase in increments of 5 to 10 mg/kg/day until seizures are controlled or side effects preclude further increases
Maximum Recommended Dose: 60 mg/kg/day

CONVERSION to Monotherapy:
-Initial dose as above while concomitant antiepileptic drug (AED) is reduced by 25% every 2 weeks; AED dose reductions can begin with initiation of therapy or delayed by 1 to 2 weeks; speed and duration may be highly variable, and patients should be monitored closely during this period

CONVERSION From Delayed-Release to Extended-Release: Patients should receive an extended-release dose that is 8% to 20% higher than the total daily dose of the delayed-release

Comments:
-This drug is indicated in the treatment of complex partial seizures that occur in isolation or in association with other types of seizures; its use as initial monotherapy has not been systematically studied.
-A good correlation has not been established between daily dose, serum concentrations, and therapeutic effect, however, a serum level between 50 and 100 mcg/mL is therapeutic for most patients; some patients may be controlled with higher or lower serum concentrations.
-Optimal clinical response is usually achieved at doses below 60 mg/kg/day; if satisfactory clinical response has not been achieved, plasma levels should be measured.
-No recommendations can be made for doses exceeding 60 mg/kg/day

lactation is not recomended