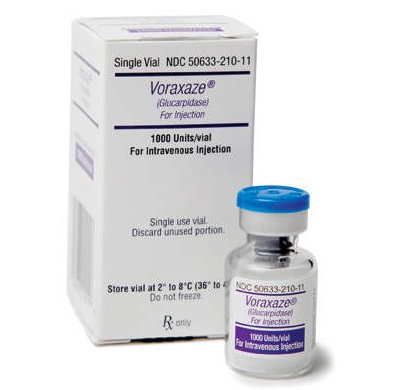 Glucarpidase is a recombinant enzyme which rapidly hydrolyzes the carboxyl-terminal glutamate residue from extracellular methotrexate into inactive metabolites (DAMPA and glutamate), resulting in a rapid reduction of methotrexate concentrations independent of renal function

Onset of Action:Methotrexate toxicity: Reduces methotrexate concentrations by ≥97% within 15 minutes of IV administration

Duration of Action:Methotrexate toxicity: Maintains a >95% reduction of methotrexate concentrations for up to 8 day

50 units/kg as a single IV injection over 5 minutes

There are no contraindications listed in the manufacturer's labeling.

Due to the long half-life of DAMPA (~9 hours), measurement of methotrexate using immunoassays is unreliable for samples collected within 48 hours following glucarpidase administration

No dose adjustment is recommended for the continuing leucovorin regimen

For the first 48 hours after glucarpidase, administer the same leucovorin dose as given prior to glucarpidase

Beyond 48 hours after glucarpidase, administer leucovorin based on the measured methotrexate concentration

Continue hydration and alkalinization of the urine as indicated

Consult a physician before using

There are no available data on use in pregnant women or animal reproduction studies to evaluate for a drug-associated risk of major birth defects, miscarriage or adverse maternal or fetal outcomes