Drug information of Sacubitril and valsartan 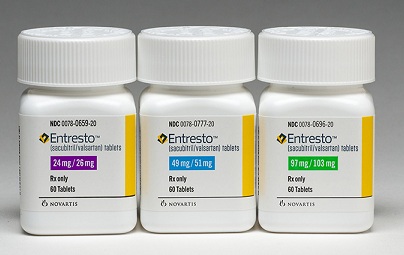 Sacubitril: Neprilysin inhibitor; neprilysin is responsible for degradation of atrial and brain natriuretic peptide; the cardiovascular and renal effects of sacubitril’s active metabolite (LBQ657) in heart failure are attributed to the increased levels of peptides that are degraded by neprilysin (eg, natriuretic peptide); administration results in increased natriuresis, increased urine cGMP, and decreased plasma MR-proANP and NT-proBNP

significantly increased urine ANP and cGMP and plasma cGMP, and decreased plasma NT-proBNP, aldosterone and endothelin-1. In clinical studies, this combination had no effect on QTc interval.

LBQ657 is not further metabolized to a significant extent

Valsartan is minimally metabolized; only about 20% of the dose is recovered as metabolites; a hydroxyl metabolite has been identified in plasma at low concentrations (<10%)

patient who has experienced angioedema