Levamisole is a cancer (antineoplastic) medication. Levamisole interferes with the growth of cancer cells and slows their growth and spread in the body. Levamisole is used in the treatment of colon cancer. Levamisole may also be used for purposes other than those listed in this medication guide.

Levamisole has been tried experimentally in rheumatic disorders where it apparently restores the immune response by increasing macrophage chemotaxis and T-lymphocyte function. Paradoxically, this immune enhancement appears to be beneficial in rheumatoid arthritis where dermatitis, leukopenia, and thrombocytopenia, and nausea and vomiting have been reported as side effects.

Levamisole was withdrawn from the US and Canadian markets in 2000 and 2003, respectively, due to the risk of serious side effects and the availability of more effective replacement medications. 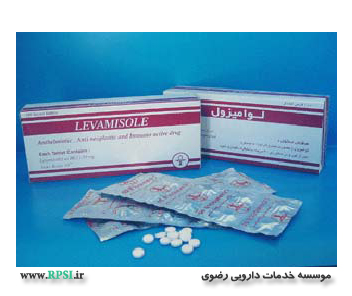 The mechanism of action of  levamisole as an antiparasitic agent appears to be tied to its agonistic activity towards the L-subtype nicotinic acetylcholine receptors in nematode muscles.

This agonistic action reduces the capacity of the males to control their reproductive muscles and limits their ability to copulate. The mechanism of action of Levamisole as an anticancer drug in combination with fluorouracil is unknown.

The effects of  levamisole on the immune system are complex.  Levamisole can stimulate formation of antibodies to various antigens, enhance T-cell responses by stimulating T-cell activation and proliferation, potentiate monocyte and macrophage functions including phagocytosis and chemotaxis, and increase neutrophil mobility, adherence, and chemotaxis.

Levamisole is a synthetic imidazothiazole derivative that has been widely used in treatment of worm infestations in both humans and animals. As an anthelmintic, it probably works by targeting the nematode nicotinergic acetylcholine receptor. As an immunomodulator, it appears that Levamisole is an immunostimulant which has been shown to increase NK cells and activated T-cells in patients receiving this adjuvantly along with 5FU for Stage III colon cancer.

Absorption: Levamisole is rapidly absorbed (2 hours) from the gastrointestinal tract.

Volume of distribution: Not Available

Metabolism: Primarily hepatic (extensive) with both active and inactive metabolites.

Route of elimination: Not Available

Affected organisms: Humans and other mammals

The dose of levamisole will be different for different patients. Follow your doctor's orders or the directions on the label.

50 mg orally every 8 hours for 3 days (starting 7-30 days post-surgery). May be given as maintenance therapy for 3 days at 2 week intervals for 1 year.