An alkylating agent of value against both hematologic malignancies and solid tumors.
For the treatment of primary and metastatic brain tumors as a component of combination chemotherapy in addition to appropriate surgical and/or radiotherapeutic procedures. Also used in combination with other agents as secondary therapy for the treatment of refractory or relapsed Hodgkin's disease. 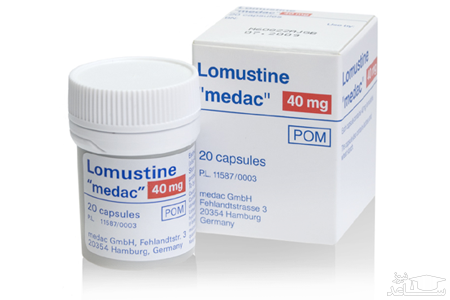 Lomustine is an alkylating agent of the nitrosourea type. Lomustine and its metabolites interferes with the function of DNA and RNA. It is cell cycle–phase nonspecific. Cancers form when some cells within the body multiply uncontrollably and abnormally. These cells then spread and destroy nearby tissues. Lomustine acts by slowing this process down. It kills cancer cells by damaging the DNA (the genetic material inside the cells) and stops them from dividing.

Myelosuppression is delayed, dose-related, and cumulative; thrombocytopenia is generally more severe than leukopenia; may occur 4-6 weeks after drug administration and persist for 1- 2 weeks; thrombocytopenia and leucopenia may contribute to bleeding and overwhelming infections in an already compromised patient; monitor blood counts weekly for 6 or more weeks after a dose; do not give therapy more frequently than every 6 weeks; bone marrow toxicity is cumulative; adjust dose based on nadir blood counts from prior dosage


Causes myelosuppression that can result in fatal infections and bleeding; monitor blood counts for at least 6 weeks after each dose; do not give more frequently than q6wk due to delayed myelosuppression

Secondary malignancies reported; acute leukemia and myelodysplasia can occur with long-term use

Unknown if metabolites present in breast milk; avoid nursing during treatment and for 2 weeks after final dose