It is used to treat schizophrenia and bipolar problems. 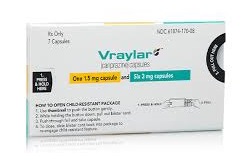 Hypersensitivity to the active component or any of the ingredients

What do I need to tell my doctor BEFORE I take Cariprazine
If you are allergic to cariprazine; any part of cariprazine; or any other drugs, foods, or substances
If you have any of these health problems: Kidney disease or liver disease
If you take any other drugs (prescription or OTC, natural products, vitamins). There are many drugs that interact with cariprazine, like certain drugs that are used for HIV, infections, or seizures

To lower the chance of feeling dizzy or passing out, rise slowly if you have been sitting or lying down. Be careful going up and down stairs

Have blood work checked as you have been told by the doctor. Talk with the doctor

Be careful in hot weather or while being active. Drink lots of fluids to stop fluid loss

High blood sugar or diabetes, high cholesterol, and weight gain have happened with drugs like this one. These may raise the chance of heart and brain blood vessel disease

This medicine may cause seizures in some patients. Talk with the doctor

Dizziness, sleepiness, and feeling less stable may happen with cariprazine. These may lead to falling, which can cause broken bones or other health problems

Consult a physician before using
Neonates exposed to antipsychotic drugs during third trimester of pregnancy are at risk for extrapyramidal symptoms or withdrawal symptoms after delivery; these complications vary in severity, with some being self-limited and others requiring ICU support and prolonged hospitalization