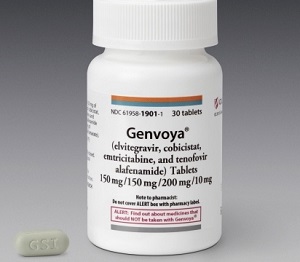 Integrase is an HIV-1 encoded enzyme that is required for viral replication. Inhibition of integrase prevents the integration of HIV-1 DNA into host genomic DNA, blocking the formation of the HIV-1 provirus and propagation of the viral infection. Elvitegravir does not inhibit human topoisomerases I or II.

Use: In combination with a ritonavir-boosted HIV protease inhibitor and at least 1 other antiretroviral drug, for the treatment of HIV-1 infection in antiretroviral therapy-experienced patients.

Increased serum amylase (greater than 2 times the upper limit of normal [2 x ULN]) has been reported in 6% of patients.

If serum amylase was greater than 1.5 x ULN, lipase was also measured. Increased lipase (grades 3 to 4) has been reported in 14% of patients.[Ref]

Increased creatine kinase (at least 10 x ULN) has been reported in 6% of patients.[Ref]

Hematuria (greater than 75 RBC/high power field) and urine glucose (4+) have been reported in 6% and 4% of patients, respectively.

Decreased neutrophils (less than 750/mm3) has been reported in 3% of patients.

Suicidal ideation and suicide attempt were reported in patients with history of depression or psychiatric illness.[Ref]

WARNING/CAUTION: Even though it may be rare, some people may have very bad and sometimes deadly side effects when taking a drug. Tell your doctor or get medical help right away if you have any of the following signs or symptoms that may be related to a very bad side effect:

Before taking this medicine

Store below 30°C (86°F). Dispense only in original container.

Use is recommended only if clearly needed and the benefit outweighs the risk to the fetus.

Comments: Use of effective contraception during therapy has been recommended.

Breastfeeding is not recommended during use of this drug.

Comments:
-The effects in the nursing infant are unknown.
-The US CDC, American Academy of Pediatrics, and manufacturer advise HIV-infected women not to breastfeed to avoid postnatal transmission of HIV to a child who may not yet be infected.