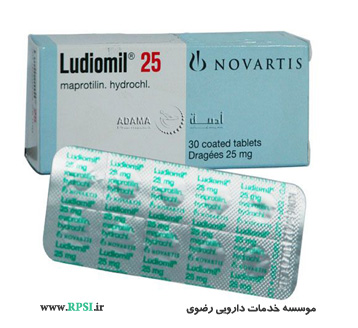 The postulated mechanism of Maprotiline is that it acts primarily by potentiation of central adrenergic synapses by blocking reuptake of norepinephrine at nerve endings. This pharmacologic action is thought to be responsible for the drug's antidepressant and anxiolytic effects.

Maprotiline is a tetracyclic antidepressant. Although its main therapeutic use is in the treatment of depression

Absorption: Slowly, but completely absorbed from the GI tract following oral administration. Protein binding: 88% Metabolism: Hepatic Approximately 60% of a single orally administered dose is excreted in urine as conjugated metabolites within 21 days; 30% is eliminated in feces. Half life: Average ~ 51 hours

hypersensitivity to drug or its components. , in patients with history of convulsive disorders , Concomitant with MAOIs , Myocardial infarction

1-Patients of all ages who are started on antidepressant therapy should be monitored appropriately and observed closely for clinical worsening, suicidality, or unusual changes in behavior.
2-It should be noted that Maprotiline is not approved for use in treating bipolar depression.
3-The pupillary dilation that occurs following use of many antidepressant drugs including Maprotiline may trigger an angle-closure attack in a patient with anatomically narrow angles who does not have a patent iridectomy.
4-Seizures have been associated with the use of Maprotiline.

1-Patients, their families and their caregivers should be encouraged to be alert to the emergence of anxiety, agitation, panic attacks, insomnia, irritability, hostility, aggressiveness, impulsivity, akathisia (psychomotor restlessness), hypomania, mania, other unusual changes in behavior, worsening of depression, and suicidal ideation, especially early during antidepressant treatment and when the dose is adjusted up or down.
2-Maprotiline should be discontinued if there is evidence of pathological neutrophil depression. Leukocyte and differential counts should be performed in patients who develop fever and sore throat during therapy.
3-Take without regard to meals. Limit caffeine intake.