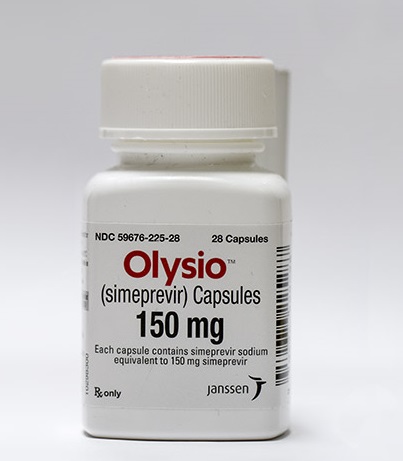 Simeprevir is accumulated in the liver after uptake into hepatocytes via OATP1B1/3. NS3/4A heterodimeric complex is composed of the cofactor N4A subunit and N3 subunit which contains the proteolytic site. The NS3/4A protease cleaves the HCV polyprotein downstream of the NS3 site, generating non-structural viral proteins NS3, NS4A, NS4B, NS5A and NS5A and subsequently formation of mature proteins. Simeprevir exerts an inhibitory action on HCV polyprotein cleavage via induced-fit binding to an extended S2 subsite located in the NS3 catalytic site. NS3/4A inhibitors usually depend on few interactions located in the substrate binding groove of the viral serine protease, thus are susceptible to resistance and failed treatment from few critical mutations in these sites.

Simeprevir is a direct-acting antiviral agent and inhibitor for HCV NS3/4A protease, which is an important enzyme required for viral replication. Unlike Boceprevir and Telaprevir, simeprevir is a competitive, reversible, macrocyclic, noncovalent inhibitor. The macromolecular cyclic portion of the molecule improves the affnity and selectivity characteristics, which allows rapid association and slow dissociation to the protein target through noncovalent binding.

Mildly inhibits CYP1A2 and intestinal CYP3A, but does not affect hepatic CYP3A4 activity

150 mg orally once a day with food

Hepatitis B virus (HBV) reactivation has been reported in HCV/HBV coinfected patients who were undergoing or had completed treatment with HCV DDAs, and who were not receiving HBV antiviral therapy; HBV reactivation is characterized as an abrupt increase in HBV replication manifesting as a rapid increase in serum HBV DNA level (see Black Box Warnings and Dosing Considerations)

Photosensitivity reported, including serious reactions which resulted in hospitalization

Rash may occur, most frequently within the first 4 weeks; mild-to-moderate rashes should be followed for possible progression of rash, including the development of mucosal signs (eg, oral lesions, conjunctivitis) or systemic symptoms; discontinue if rash becomes severe

Contains a sulfonamide moiety; in subjects with a history of sulfa allergy (n=16), no increased incidence of rash or photosensitivity reactions was observed; however, insufficient data exist

Must NOT be used as monotherapy

Some cases have resulted in fulminant hepatitis, hepatic failure, and death