Drug information of lumacaftor and Ivacaftor

Lumacaftor is a drug used in combination with Ivacaftor as the fixed dose combination product for the management of Cystic Fibrosis (CF) in patients aged 6 years and older. 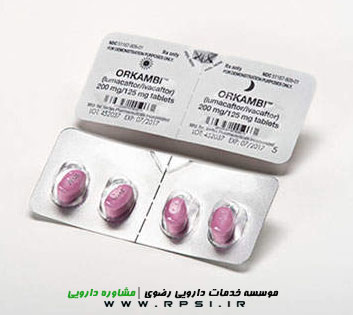 Lumacaftor improves CF symptoms and underlying disease pathology by aiding the conformational stability of F508del-mutated CFTR, resulting in increased processing and trafficking of mature protein to the cell surface. More specifically, lumacaftor acts as a protein-folding chaperone, preventing misfolding of CFTR ion channels and consequent destruction during processing in the endoplasmic reticulum.

The CFTR protein is a chloride channel present at the surface of epithelial cells in multiple organs; ivacaftor facilitates increased chloride transport by potentiating the channel-open probability (or gating) of mutated CFTR proteins

If the patient’s genotype is unknown, an FDA-cleared CF mutation test should be used to detect the presence of the F508del mutation on both alleles of the CFTR gene

<2 years: Safety and efficacy not established

Liver function decompensation, including liver failure leading to death, has been reported in cystic fibrosis patients with pre-existing cirrhosis with portal hypertension

Respiratory events (e.g., chest discomfort, dyspnea, and respiration abnormal) were observed more commonly in patients during initiation of therapy compared to those who received placebo; these events have led to drug discontinuation and can be serious, particularly in patients with advanced lung disease (percent predicted FEV1 <40); clinical experience in patients with ppFEV1 <40 is limited, and additional monitoring of these patients is recommended

Lumacaftor is a strong inducer of CYP3A; coadministration with sensitive CYP3A substrates or those with a narrow therapeutic index is not recommended

Ivacaftor is a substrate of CYP3A4 and CYP3A5; coadministration with strong inducers is not recommended because of significantly reduced systemic exposure of ivacaftor

Safety and efficacy in patients < 12 years, with cystic fibrosis, not established

Follow all directions on your prescription label and read all medication guides or instruction sheets. Use the medicine exactly as directed.

To use the oral granules: Mix the granules with 1 teaspoon of milk, juice, or soft food such as applesauce, yogurt, or pudding. Mix only 1 dose at a time, and use the mixture within 1 hour after mixing. Feed the child a high-fat food just before or just after giving the granule mixture.

Take your doses at regular intervals, 12 hours apart. This will keep a steady amount of the drug in your body at all times.

Ivacaftor and lumacaftor doses are based on age and weight in children. Children from 2 to 5 years old should take oral granules. Children 6 and older should take tablets.

You will need frequent blood tests to check your liver function. Your blood pressure may also need to be checked often.

A child using this medicine may need frequent eye exams.

What happens if I miss a dose?

Take the medicine as soon as you can, but skip the missed dose if you are more than 6 hours late for the dose. Do not take two doses at one time.

Be sure to take a missed dose with a food that contains fat.

If you miss doses or stop taking ivacaftor and lumacaftor for more than 1 week, call your doctor before you start taking the medicine again. You may need a different dose.