Levomethadyl (lee-voe-METH-a-dil) belongs to the group of medicines known as narcotic analgesics (nar-KOT-ik an-al-GEE-zicks) . It is used as a substitute for illegal narcotics in addiction treatment programs. This medicine is not a cure for addiction. It is used as part of an overall program that may include counseling, attending support group meetings, and other treatment recommended by your doctor.

Another narcotic, methadone, is also used in detoxification and maintenance programs. Methadone begins to work faster than levomethadyl does when treatment is started, but it has to be taken every day. Levomethadyl starts to work slowly, but it does not have to be taken every day. Therefore, some people may start treatment with methadone and then change over to levomethadyl after several weeks. Other people may receive only one medicine or the other during the entire time of treatment. Your doctor and your counselor at the clinic will decide on the best treatment plan for you. 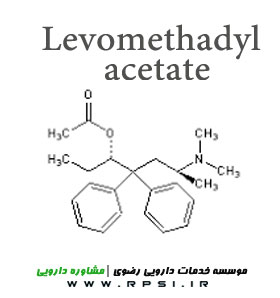 Opiate receptors (Mu, Kappa, Delta) are coupled with G-protein receptors and function as both positive and negative regulators of synaptic transmission via G-proteins that activate effector proteins. Binding of the opiate stimulates the exchange of GTP for GDP on the G-protein complex. As the effector system is adenylate cyclase and cAMP located at the inner surface of the plasma membrane, opioids decrease intracellular cAMP by inhibiting adenylate cyclase. Subsequently, the release of nociceptive neurotransmitters such as substance P, GABA, dopamine, acetylcholine and noradrenaline is inhibited. Opioids also inhibit the release of vasopressin, somatostatin, insulin and glucagon. Levomethadyl acetate effectively opens calcium-dependent inwardly rectifying potassium channels (OP1 receptor agonist), resulting in hyperpolarization and reduced neuronal excitability.

Levomethadyl acetate (also known as LAAM) is a synthetic synthetic opioid analgesic with multiple actions quantitatively similar to those as morphine, the most prominent of which involve the central nervous system and organs composed of smooth muscle. However, levomethadyl acetate is more active and more toxic than morphine. The principal actions of therapeutic value are analgesia and sedation and detoxification or temporary maintenance in narcotic addiction. In this respect, the drug is similar to Methadone and also has structural similarities to it. The levomethadyl acetate abstinence syndrome, although qualitatively similar to that of morphine, differs in that the onset is slower, the course is more prolonged, and the symptoms are less severe.

Levomethadyl acetate is rapidly absorbed from an oral solution.

ORLAAM (levomethadyl acetate) is indicated for the management of opiate dependence. ORLAAM (levomethadyl acetate) should be reserved for the use in treatment of opiate-addicted patients who fail to show an acceptable response to other adequate treatments for opiate addiction, either because of insufficient effectiveness or the inability to achieve effective dose due to intolerable adverse effects from those drugs.

The initial dose of ORLAAM (levomethadyl acetate) for street addicts should be 20 to 40 mg. Each subsequent dose, administered at 48- or 72-hour intervals, may be adjusted in increments of 5 to 10 mg until a pharmacokinetic and pharmacodynamic steady-state is reached, usually within 1 or 2 weeks (see INDIVIDUALIZATION OF DOSAGE ).

Patients dependent on methadone may require higher initial doses of ORLAAM (levomethadyl acetate) . The suggested initial 3-times-a-week dose of ORLAAM (levomethadyl acetate) for such patients is 1.2 to 1.3 times the daily methadone maintenance dose being replaced. This initial dose should not exceed 120 mg and subsequent doses, administered at 48- or 72-hour intervals, should be adjusted according to clinical response.

ORLAAM (levomethadyl acetate) is contraindicated in patients with known or suspected QT prolongation (QTc interval greater than 430 [male] or 450 [female] ms). This would include patients with congenital long QT syndrome, or conditions which may lead to QT prolongation (see WARNINGS, Effects on Cardiac Conduction ) such as: 1) clinically significant bradycardia (less than 50 bpm), 2) any clinically significant cardiac disease, 3) treatment with Class I and Class III anti-arrhythmics, 4) treatment with monoamine oxidase inhibitors (MAOI's), 5) concomitant treatment with other drug products known to prolong the QT interval (see PRECAUTIONS , Drug Interactions ), and 6) electrolyte imbalance, in particular hypokalemia and hypomagnesemia.

ORLAAM (levomethadyl acetate) is contraindicated in patients with known hypersensitivity to LAAM.

Physicians should be alert to palpitations, syncope, or other symptoms suggestive of episodes of irregular cardiac rhythm in patients taking ORLAAM and promptly evaluate such cases

No interaction studies have been performed in humans. ORLAAM (levomethadyl acetate) is metabolized by the cytochrome P450 isoform, CYP3A4. The addition of drugs that induce this enzyme could increase the levels of active metabolites in a patient that was previously at steady-state.

Caution should be used when prescribing concomitant drugs known to induce hypokalemia or hypomagnesemia as they may precipitate QT prolongation and interact with ORLAAM (levomethadyl acetate) . These would include diuretics, laxatives and supraphysiological use of steroid hormones with mineralocorticoid potential.

Polydrug and Alcohol Abusers Patients who are known to abuse sedatives, tranquilizers, propoxyphene, antidepres-sants, benzodiazepines, and alcohol should be warned of the risk of serious overdose if these substances are taken while on ORLAAM (levomethadyl acetate) maintenance.

Interaction with Narcotic Antagonists, Mixed Agonists/Antago-nists, Partial Agonists, and Pure Agonists As with other mu agonists, patients maintained on ORLAAM (levomethadyl acetate) may experience withdrawal symptoms when administered pure narcotic antagonists, such as naloxone, naltrexone, and nalmefene, or when administered mixed agonists/antagonists or partial agonists such as pentazocine, nalbuphine, butorphanol, and buprenorphine.

In addition, agonists such as meperidine and propoxyphene, which are N-demethylated to long-acting, excitatory metabolites, should not be used by patients taking ORLAAM (levomethadyl acetate) because they would be ineffective unless given in such high doses that the risk of toxic effects of the metabolites becomes unacceptable.

Anesthesia and Analgesia Patients receiving ORLAAM (levomethadyl acetate) will develop a similar level of tolerance for opioids as patients receiving methadone. Anesthetists and other practitioners should be prepared to adjust their management of these patients accordingly.

Other Drug Interactions The anti-tuberculosis drug rifampin has been found to produce a marked (50%) reduction in serum methadone levels, leading to the appearance of symptoms of withdrawal in well-stabilized methadone maintenance patients. Similar effects on serum methadone levels have been observed for carbamazepine, phenobarbital, and phenytoin. The presumed mechanism for this effect is the induction of methadone metabolizing enzymes. Since ORLAAM (levomethadyl acetate) is metabolized into a more active metabolite, nor-LAAM, administration of these drugs may increase ORLAAM (levomethadyl acetate) 's peak activity and/or shorten its duration of action.

Conversely, drugs like erythromycin, cimetidine, and anti-fungal drugs like ketoconazole that inhibit hepatic metabolism, may slow the onset, lower the activity, and/or increase the duration of action of ORLAAM (levomethadyl acetate) . Caution and close observation of patients receiving these drugs are advised to allow early detection of any need to adjust the dose or dosing interval.

ORLAAM (levomethadyl acetate) should be administered with extreme caution to patients who may be at risk for development of prolonged QT syndrome (e.g., congestive heart failure, bradycardia, use of a diurectic, cardiac hypertrophy, hypokalemia, or hypomagnesemia).

ORLAAM (levomethadyl acetate) is metabolized to active metabolites by the cytochrome P450 isoform, CYP3A4. Therefore, the addition of drugs that induce this enzyme (such as rifampin, phenobarbital, and phenytoin) or inhibit this enzyme (such as ketoconazole, erythromycin, and saquinavir) could increase the levels of parent drug or its active metabolites in a patient that was previously at steady-state, and this could potentially precipitate serious arrhythmias, including torsade de pointes