Siponimod (also known as BAF312 or Mayzent) is a tablet being developed for secondary progressive MS by Novartis Pharmaceuticals. It was licensed by the European Medicines Agency (EMA) on Monday 20 January 2020. 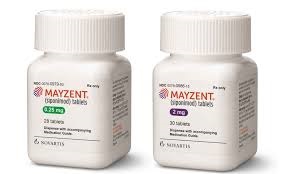 Binds with high affinity to S1P receptors 1 and 5; blocks lymphocyte egress from lymph nodes, reducing the number of lymphocytes in peripheral blood

Mechanism by which siponimod exerts therapeutic effects in MS is unknown, but may involve reduction of lymphocyte migration into the central nervous system

Siponimod works in a similar way to the licensed treatment fingolimod.

It traps certain types of immune cell (called B and T cells) in the body's lymph nodes. This stops them from getting into the brain and spinal cord, where they could cause damage to the protective myelin coating around the nerves.

Eliminated from the systemic circulation mainly due to metabolism, and subsequent biliary/fecal excretion; unchanged siponimod was not detected in urine

lefamulin will increase the level or effect of siponimod by affecting hepatic/intestinal enzyme CYP3A4 metabolism. Contraindicated. Lefamulin is contraindicated with CYP3A substrates know to prolong the QT interval

Macular edema reported; majority of cases occurred within the first 4 months of therapy

Elevated transaminases may occur; exercise caution when treating patients with a history of significant liver disease

Incidence of hypertension reported in clinical trials in patients treated with siponimod was slightly higher than those treated with placebo; monitor blood pressure during treatment and manage appropriately

Based on animal studies, fetal harm may occur (see Pregnancy)

Rare cases of posterior reversible encephalopathy syndrome reported in patients receiving a sphingosine 1-phosphate (S1P) receptor modulator; such events have not been reported for siponimod-treated patients in the development program

After discontinuing, siponimod remains in the blood for up to 10 days; starting other therapies during this interval results in concomitant exposure to siponimod