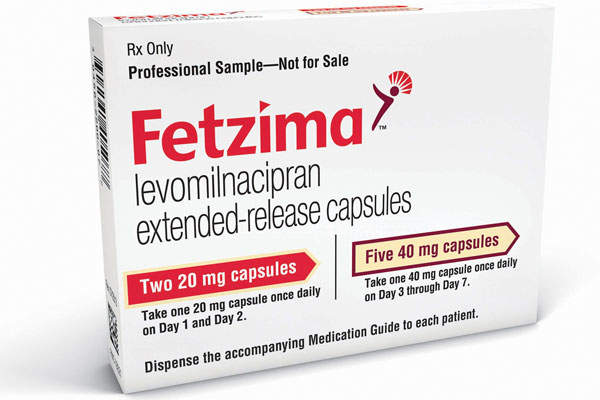 Levomilnacipran, the more active enantiomer of milnacipran, is a potent inhibitor of norepinephrine and serotonin reuptake

Canadian labeling: Additional contraindications (not in US labeling): Use in patients with myocardial infarction or cardiac intervention within the past 12 months; HF (NYHA Class III or IV); uncontrolled tachyarrhythmia; uncontrolled hypertension; history of cerebrovascular accident.

Along with its needed effects, levomilnacipran may cause some unwanted effects. Although not all of these side effects may occur, if they do occur they may need medical attention.

Check with your doctor immediately if any of the following side effects occur while taking levomilnacipran:

Before taking this medicine:

Do not use levomilnacipran within 7 days before or 14 days after you have taken an MAO inhibitor. A dangerous drug interaction could occur. MAO inhibitors include isocarboxazid, linezolid, methylene blue injection, phenelzine, rasagiline, selegiline, and tranylcypromine.

Tell your doctor if you have ever had:

Be sure your doctor knows if you also take stimulant medicine, opioid medicine, herbal products, or medicine for depression, mental illness, Parkinson's disease, migraine headaches, serious infections, or prevention of nausea and vomiting. These medicines may interact with levomilnacipran and cause a serious condition called serotonin syndrome.

Some young people have thoughts about suicide when first taking an antidepressant. Your doctor should check your progress at regular visits. Your family or other caregivers should also be alert to changes in your mood or symptoms.

• Bleeding risk: May impair platelet aggregation resulting in increased risk of bleeding events, particularly if used concomitantly with aspirin, NSAIDs, warfarin or other anticoagulants. Bleeding related to SNRI use has been reported to range from relatively minor bruising and epistaxis to life-threatening hemorrhage.

• Cardiovascular effects: May increase blood pressure and heart rate; blood pressure and heart rate should be evaluated prior to initiating therapy and periodically thereafter; consider dose reduction or gradual discontinuation of therapy in individuals with sustained hypertension or tachycardia during therapy; use with caution in patients with preexisting hypertension, tachyarrhythmias (eg, atrial fibrillation), or other cardiovascular disease.

• Fractures: Bone fractures have been associated with antidepressant treatment. Consider the possibility of a fragility fracture if an antidepressant-treated patient presents with unexplained bone pain, point tenderness, swelling, or bruising .

• SIADH and hyponatremia: SSRIs and SNRIs have been associated with the development of SIADH; hyponatremia has been reported rarely (including severe cases with serum sodium <110 mmol/L). Age (the elderly), volume depletion and/or concurrent use of diuretics likely increases risk. Discontinue treatment in patients with symptomatic hyponatremia.

Be sure your doctor knows if you also take stimulant medicine, opioid medicine, herbal products, or medicine for depression, mental illness, Parkinson's disease, migraine headaches, serious infections, or prevention of nausea and vomiting. These medicines may interact with levomilnacipran and cause a serious condition called serotonin syndrome.

Ask your doctor about taking this medicine if you are pregnant. Taking an SNRI antidepressant during late pregnancy could increase your risk of excessive bleeding just after you give birth, and may cause serious medical complications in the baby. However, you may have a relapse of depression if you stop taking your antidepressant. Tell your doctor right away if you become pregnant. Do not start or stop taking this medicine without your doctor's advice.

If you are pregnant, your name may be listed on a pregnancy registry to track the effects of levomilnacipran on the baby.

If you breastfeed while taking levomilnacipran, tell your doctor if your baby is agitated or irritable and has feeding problems or trouble gaining weight.

Take the medicine at the same time each day, with or without food.

Your blood pressure and heart rate will need to be checked often.

Do not stop using levomilnacipran suddenly, or you could have unpleasant withdrawal symptoms. Follow your doctor's instructions about tapering your dose.

This drug should be used during pregnancy only if the benefit outweighs the risk to the fetus.

A decision should be made to discontinue breast-feeding or discontinue the drug, taking into account the importance of the drug to the mother.

Comments:
-The effects in the nursing infant are unknown.
-Exposed infants should be monitored for agitation, feeding, irritability, and weight gain.