Diamorphine is a type of strong opioid. It is used in particular to treat pain after a surgical operation and pain caused by cancer. It may also be used following a heart attack, or for breathlessness caused by fluid in the lungs. It works on your nervous system and brain to reduce the amount of pain you feel. 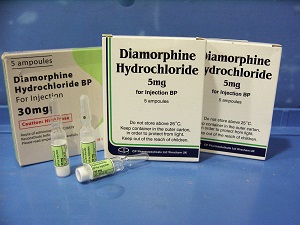 Bioavailability is less than 35% when orally administered
Diamorphine does not bind to plasma protein
diamorphine undergoes deacetylation via various esterase enzymes to generate active metabolites like 6-monoacetylmorphine and morphine 5,6. In particular, when administered orally, diamorphine undergoes extensive first pass metabolism
The majority of the drug is excreted via the kidney as glucuronides and to a much lesser extent as morphine

This medicine had been prescribed for you to relieve moderate to severe pain. Diamorphine is used for the relief of severe pain associated with surgical procedures, heart attack and pain in terminally ill patients. It is also used to treat breathlessness caused by fluid in the lungs. It contains diamorphine hydrochloride which belongs to a class of medicines called opioids, which are ‘pain relievers’. This medicine has been prescribed to you and should not be given to anyone else. Opioids can cause addiction and you may get withdrawal symptoms if you stop taking it suddenly. Your prescriber should have explained how long you will be taking it for and when it is appropriate to stop, how to do this safely

Diamorphine injection must be used immediately after preparation.
• The usual adult dose for treatment of acute or chronic pain is 5mg to 10mg every four hours, given by injection under the skin or into muscle or 1.25 to 5mg every four hours given directly into a vein for acute pain. The dose will be adjusted to suit your needs.
• For a heart attack, 5mg is usually given into a vein followed, if needed, by another 2.5 to 5mg.
• For fluid on the lungs, 2.5 to 5mg is given into a vein.
• If you are elderly, a child, are severely run down including feeling weak and feeble, or have liver and kidney problems the dose will be lower. You may also be given a reduced dose if you suffer from any of the conditions listed in section 2 entitled “Speak to your doctor before Diamorphine Injection is given if you:”
• Your doctor will decide the dose that is best for you. If you do not understand what you are being given, or are in any doubt, ask your doctor or nurse

Hypersensitivity to the active substance or to any of the excipients listed in section 6.1.

Coma. Raised intracranial pressure. Head injuries, as there is an increased risk of respiratory depression that may lead to elevation of CSF pressure. The sedation and pupillary changes produced may interfere with accurate monitoring of the patient

Diamorphine is also contra-indicated where there is a risk of paralytic ileus, or in acute diarrhoeal conditions associated with antibiotic-induced pseudomembranous colitis or diarrhoea caused by poisoning

• A severe allergic reaction, such as breathing difficulties, shock or low blood pressure. If you suffer such a reaction, you should not be given any more diamorphine. Your doctor will decide on the appropriate treatment for allergic reactions. Difficulty in breathing and physical and psychological dependence are possible serious side effects. It is possible that you could become dependent on diamorphine. Other side effects include:
• drowsiness
• feeling sick or being sick
• constipation
• sweating. Apart from constipation, these side effects tend to disappear with time.
• dizziness
• feeling faint on standing up
• small pupils (in the eye)
• blurred vision
• double vision or other changes in vision
• mental clouding or confusion
• mood changes
• feeling extremely happy for no particular reason
• imagining things (hallucinations)
• headache
• vertigo
• facial flushing
• dry mouth
• difficulty or pain in passing urine
• passing less urine than usual
• biliary spasm (causing pain in the right side of your abdomen, particularly after eating a meal,
which may spread towards your right shoulder)
• palpitations
• slower or faster pulse
• skin rash
• wheals or itching
• reduced sexual drive or impotence after long term use
• dependence and addiction

Alcohol: Alcohol may enhance the sedative and hypotensive effects of diamorphine.

Anti-arrhythmics: Diamorphine may delay the absorption of mexiletine.

Antidepressants, anxiolytics, hypnotics: Severe CNS excitation or depression (hypertension or hypotension) has been reported with the concomitant use of monoamine oxidase inhibitors (MAOIs) and pethidine. It is therefore possible that a similar interaction may occur with other opioid analgesics - avoid concomitant use and for two weeks after stopping MAOIs.

The depressant effects of diamorphine may be exaggerated and prolonged by tricyclic antidepressants, anxiolytics and hypnotics.

Antivirals: Plasma concentration of opioid analgesics (except methadone) is possibly increased by ritinovir.

Opioids potentiate the effects of CNS depressants including tricyclic antidepressants, anxiolytics and hypnotics.

Antidiarrhoeal and antiperistaltic agents (such as loperamide and kaolin): concurrent use may increase the risk of severe constipation.

Antimuscarinics: The risk of severe constipation and/or urinary retention is increased by administration of antimuscarinic drugs (e.g. atropine).

Motility stimulants: There may be antagonism of the gastrointestinal effects of domperidone and metoclopramide.

Talk to your doctor before Diamorphine Injection is given if you:
• suffer from asthma (your doctor may decide to administer Diamorphine Injection if your asthma is controlled. However, you should not be given this medicine if you are having an acute asthma attack)
• suffer from bronchitis (an inflammation of the lining of the tubes in the lungs, resulting in coughing spells accompanied by thick phlegm and breathlessness) or emphysema (a lung condition which leaves you struggling for breath)
• suffer from cor-pulmonale (a type of heart failure)
• are severely obese
• have a severely deformed spine
• are suffering from mental illness brought on by an infection
• have liver problems
• have kidney problems
• have problems with your bile duct
• suffer from an enlarged prostate gland (in men) or have difficulty passing urine

You may feel drowsy and confused when you are being given Diamorpine Injection so you should not drive or operate machinery. This medicine can affect your ability to drive. Do not drive whilst taking this medicine until you know how this medicine affects you
• have ever had a reaction to or been told that you are allergic to diamorphine or morphine
• have been told you have a tumour of the adrenal gland near your kidney called phaeochromocytoma
• have severe problems with breathing
• have increased pressure on the brain, have just had a head injury or if you are unconscious
• are suffering from acute alcoholism
• are at risk from a blocked intestine
• have severe stomach cramps caused by a condition known as biliary colic
• are suffering from severe diarrhoea
• are pregnant or breast-feeding.

It is important not to become pregnant while having diamorphine. There is a risk that the baby could become dependent on it and suffer from withdrawal symptoms after birth.

Talk to your doctor or nurse about effective contraception.

It is not known whether this drug comes through into the breast milk. Doctors usually advise that you don’t breastfeed during this treatment.